May 29-Rendering MIDI to Audio MIDI has lasted over 30 years, so the MIDI data you entered in a sequencer back in the 80s can still drive today's virtual instruments (which is pretty amazing, come to think about it). However virtual instruments, computers, and operating systems don't have, shall we say, quite the same kind of longevity. You'll be reminded of this when Steven Spielberg calls to say he heard your great song by accident, wants to use it as the theme song for an upcoming blockbuster, and could you please make a few tweaks to the mix...but when you open the project, you see "Plug-in not found."

Ooops. And then you find out that the plug-in was never updated, it works only with Mac System 7, you lost your authorization code, and the company that made it went out of business years ago. Double oops.

And that's why it's a good idea to render your MIDI-driven tracks into audio files. Although you can't totally future-proof a project, the odds are extremely good that programs of the future will be able to read WAV of AIF files. 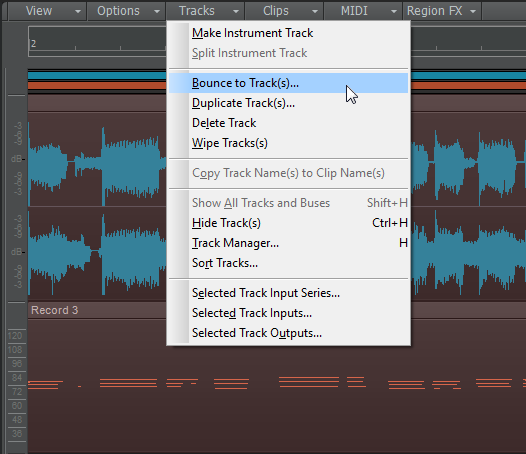 The MIDI track on the bottom has been rendered to create an audio version above it
Rendering usually just involves selecting the MIDI track, then choosing an option like "bounce" or "transform to audio." Now you've captured your instrument as an audio file. As an added bonus, you can now save the instrument preset and then delete the instrument so it no longer takes power from the CPU. However, leave the MIDI track because it requires virtually no CPU power. If you later decide you need to edit the part, re-insert the instrument, call up the preset, and re-do the part. ​
Tweet