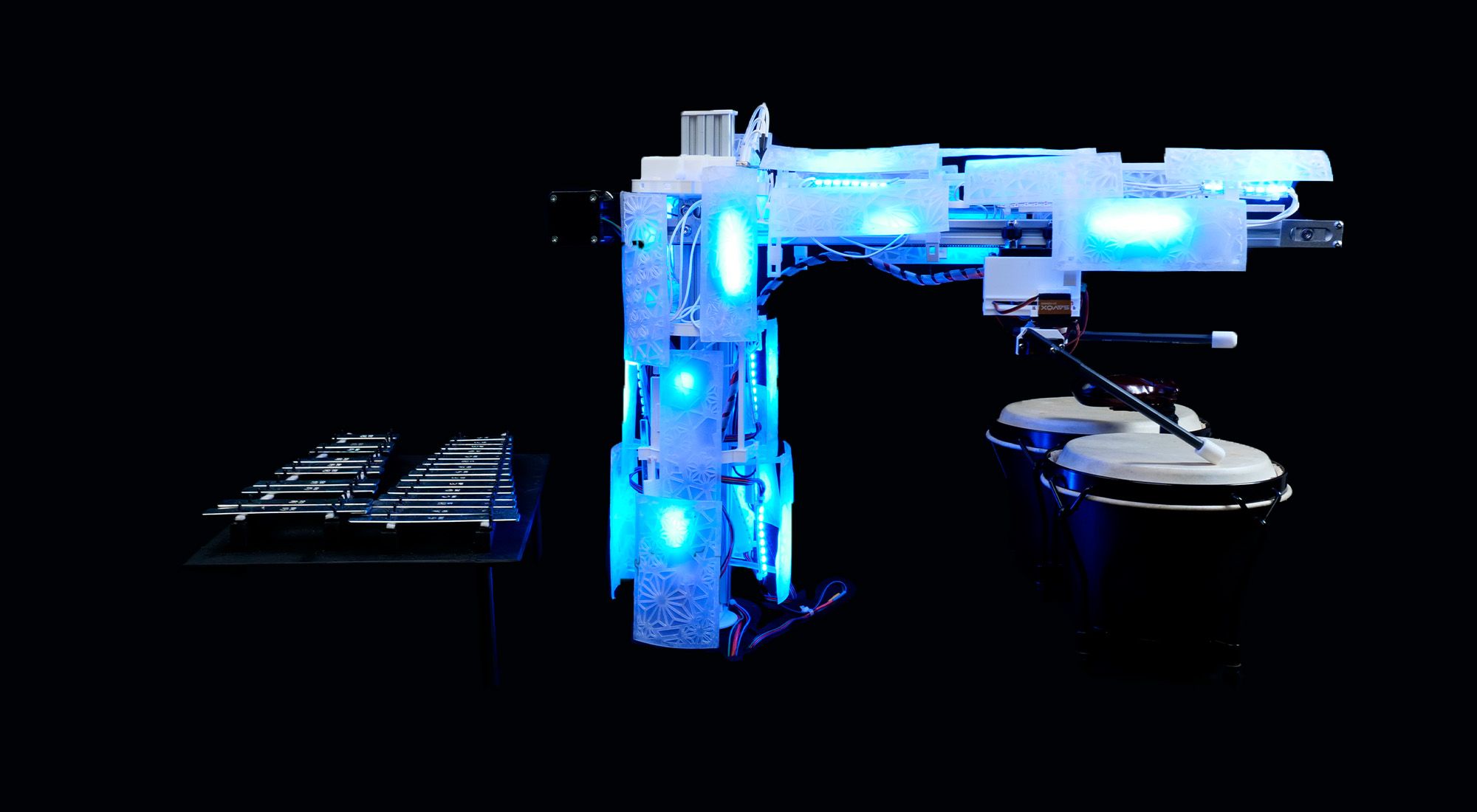 This is Eukaryote, a MIDI-controlled robot musician!

In many countries, the lockdown of 2020 was a brutal break with the world. Many families were forced to not be able to see each other for months on end. Musicians couldn't play with their friends for that long. So I decided to build my own covid-free friend. Meet Eukaryote, my quarantine buddy. Eukaryote is a robot. To communicate with him, I use the MIDI protocol, as if he was one of those many MIDI instruments you already know. For my part, I use Ableton to compose and send orders. Who sends orders to their friends, you may ask. Well, that's a question I'll answer later. For now, I'd rather tell you about the characteristics of my robot. It is a mechanism holding sticks and able to move them on 4 axes: rotation of the robot on itself, translation forward/backward of a carriage, vertical and horizontal rotation of the sticks. Contrary to what we think of a robot, it is capable of many degrees of nuances. It is also capable of groove. However, it does not yet make coffee, unlike a REAL friend. We worked a lot on the design, as Eukaryote is meant for the stage. The decorations are customizable, but are all unique pieces. Also, we did everything to make it as quiet as possible, while keeping some of the sounds that make robots so charming. Decorative and quiet, that's how we like our friends. Eukaryote fits all percussion instruments. It is possible to change the tips of its sticks to vary the sounds. In the near future, it is planned to equip him with an AI allowing him to learn by playing and to forge his own style.

It is a robot. It adds an extra dimension to the hardware available to musicians. It can play percussion with two sticks, on a surface of more than 5000cm². Its movements are extremely fluid and silent, thanks to its motors: two for each stick, one for the front/back axis and one to allow a complete rotation of the robot. It is fast, silent (allowing easy sound recording), delicate (it allows very fine movements, for the best pianissimos) and friendly (there is no risk to hurt yourself with it, nor to damage the instruments). The design makes it completely removable and customizable. It is possible to adjust the pitch, to change the tip of the sticks to change the sound, to move the instruments or add new ones, to create MIDI controllable light patterns, add motors and sticks... MIDI commands are communicated via Wi-FI to avoid too many cables, but a wired version will also be available. It is possible to control the robot directly with any MIDI controller. A version of a controller specially designed for the robot will come in the near future. In the different videos, I control it with Ableton Live 11. A web interface to control it is also under development, as well as a DAW plugin. Eukaryote is also perfectly suited for adding AI, allowing it to learn music cells by itself, but also how to produce better sounds by refining its movements. You can share MIDI files with others for the robot to play it. It is also possible to exchange MIDI files with others so that the robot can play them. Useful, when a musician can't be there!

As a cellist, I can play with it without amplification, without any disturbing noise. I can amplify it and use effect pedals on it. I really like using a looper with it. You will be able to see the result in a few time on my Youtube channel!

A lot of new features are coming. Even if it's a protorype, it's build to be used. So, you'll se me use it to create some music in the next months.