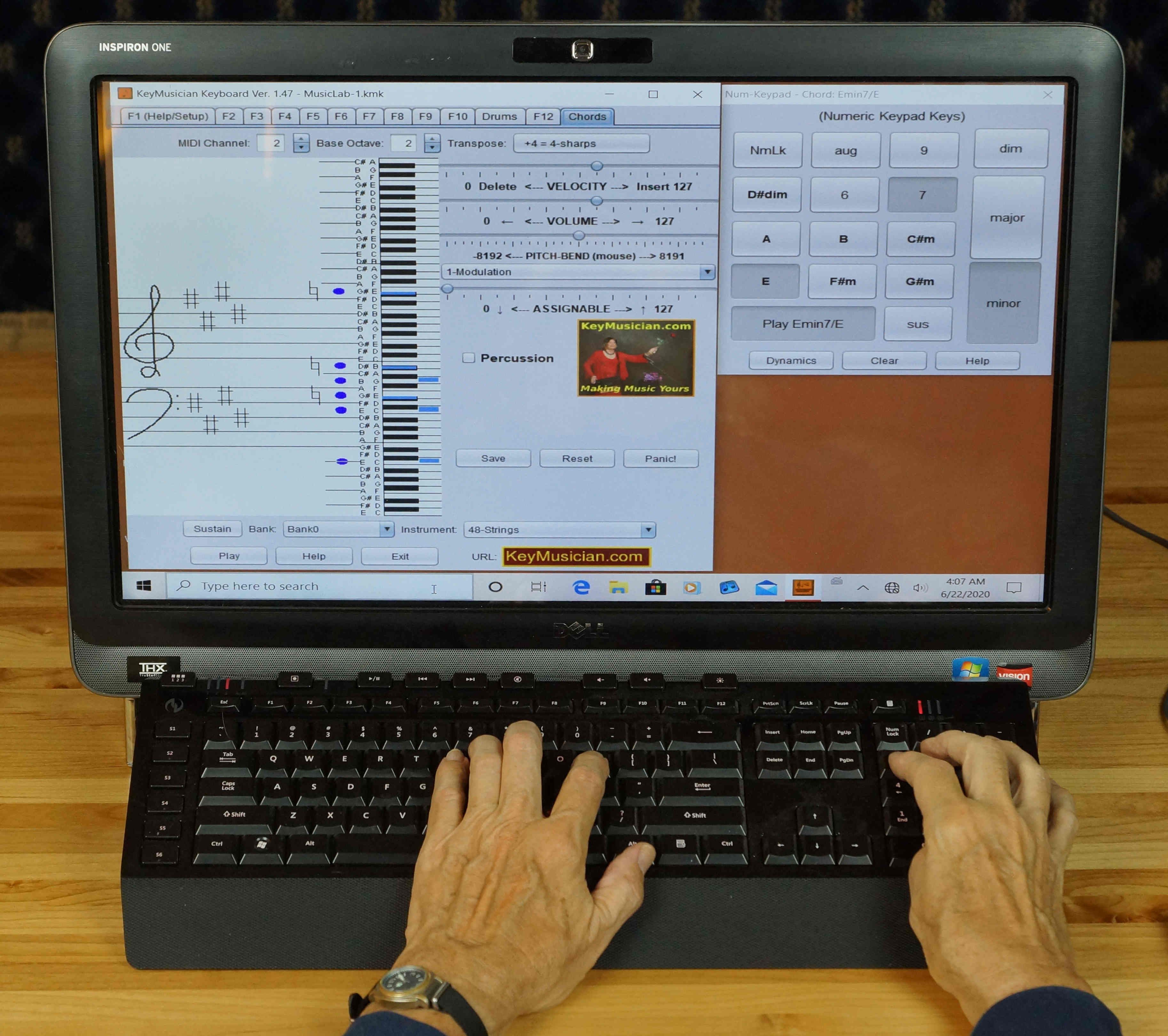 Transform your computer into an 84-key synthesizer, with great sounds, that’s easier to play than a piano. Play hundreds of chords with no memorizing.

A typing-keyboard as a musical instrument. Why? Because that’s what people with computers have. Why not a touch-screen? Because you need to play by feel, keeping your eyes on the music. And swaying like Elvis, with a keyboard in a belt, is less hazardous to the equipment than a touch-screen computer in a belt. Instead of trying to emulate a traditional music keyboard, we asked the question, how can we best make music with a typing keyboard? That different approach, gave us a range of 84 keys, and let us play over a thousand chords on the numeric keypad, with no memorization, as sustained chords, strummed chords, and arpeggios. It made the fingering the same in every key-signature, and did away with the need for boring scale exercises. And while we were at it, we designed it to help you learn to play, and read music – so much so that it takes a tenth the time to learn music with it, and far fewer people give up trying to learn to play music. People with no music experience can improvise chords-with-melody music in just 5 minutes of instruction. It is now a commercial product, available online, with many KeyMusician Newsletter articles, showing you how to use it with popular applications in the computer music world, such as Ableton Live, Logic Pro, MainStage, Dimension Pro, and many others.

It has a range of 84 keys (4 less than a piano), and the fingering (both for chords, and melody) is the same in every key-signature. The application is key-signature aware, and shows the notes played in the current key-signature. Instead of learning to play all the different key-signatures, you just set the key-signature, and you can do that by pressing a function-key. Where it automatically plays in the current key-signature, it’s easier to play tunes, because there are no white-key/black-key decisions. For that occasional note that’s not in the key-signature (called an accidental), playing it is as easy as typing an upper-case letter in an e-mail. Also, if the chord you’re playing uses a note not in the key-signature’s scale, the melody section of the keyboard is ‘gifted’ with that same accidental, if you happen to use it. The grand staff display, shows the notes played in key-signature context, as well as the note-names in that key-signature, and how they relate to a piano keyboard, as a scale-drawing. Any accidentals played (natural, flat, sharp, double-flat, or double-sharp) are shown as they would be in the music. You can learn music from a MIDI file (its notes shown in red), by matching the notes you play (normally shown in blue, but turning green when you match a target note). The notes from the MIDI file also show you which keyboard key to press. The chords natural to the current key-signature appear in the chords window, where you simply select the one you want, and possibly modify it. So there’s no memorizing which keyboard-key plays which chord. Though the chord names move around, the way you use the chord in a tune, played in any key-signature, stays the same. So if you learn a piece in one key-signature, you can play it in any key-signature. You can select the next chord while you’re playing the current chord, which can give you more time in specifying complex chords. Using our ‘modal chords’ system, a chord selected uses notes of the key-signature’s scale. This makes improvising melody with it super-easy – you just use notes of the key-signature’s scale. You don’t have to be a master of harmony in all the different key-signatures, so you learn improvisation right from the start. For playing from written music, our ‘standard chords’ system makes it easy to play, with no need to take your eyes off the music. It’s designed to play all of the chords you may encounter in popular music. You can set up ‘racks’ of 10 different instruments (chosen from hundreds of sounds), for any piece (or performance), and switch to any of them instantly, by pressing a function-key. Each of these ‘racks’ can use a different key-signature, and volume level. If you add another typing-keyboard, you get the equivalent of “piano 4-hands” – add another, and it’s “piano 6-hands”… And you have the range (84 keys) to make such performances useful. With a gamers keyboard, you can play massive chords (one note for each finger) you could never reach to play together on a piano keyboard. This makes it less necessary to use the sustain-control, which can ‘blur’ melody-notes together. If you connect a MIDI keyboard, you can learn piano in a key-signature independent fashion. All of the ease-of-learning features also work with a MIDI keyboard, which can also give you touch-sensitive expression. Play from music written for other types of instruments (such as Bb Trumpet, F Horn, or Eb Saxophone), and it plays in concert-pitch, as if it were that particular type of instrument. You can play steel-guitar type expression, using the the wah-wah keys, which modify the sound (using the pitch bender) in an up, or down direction. You can set it to play melody notes repeatedly, like a Balalaika. This also lets you play drum-rolls in the percussion pane. You can control the speed of the repeated notes, as they play. It runs on Windows, Mac OS, Linux, and with some extra setup, on ChromeOS.

At many public events where we’ve shown the KeyMusician Keyboard, kids (or adults) with no musical experience, come up and improvise their own chords-with-melody music, after only 5 minutes of instruction.

1. Allow the display of music using unusual clefs such as the Alto Clef (used by violas), or Tenor Clef.
2. Allow chords to be specified in the notation used by jazz musicians
3. Manufacture the belt for holding keyboards
4. Support for languages besides English

It’s currently for sale on the Internet, along with the “Music-Lab Discovery Lessons”, which teach music as an adventure of discovery. It’s copyrighted, and patent-pending.
View Entry's Website
About the MIDI Association
MIDI Association IP Policy
MIDI Association Anti-Trust Policy