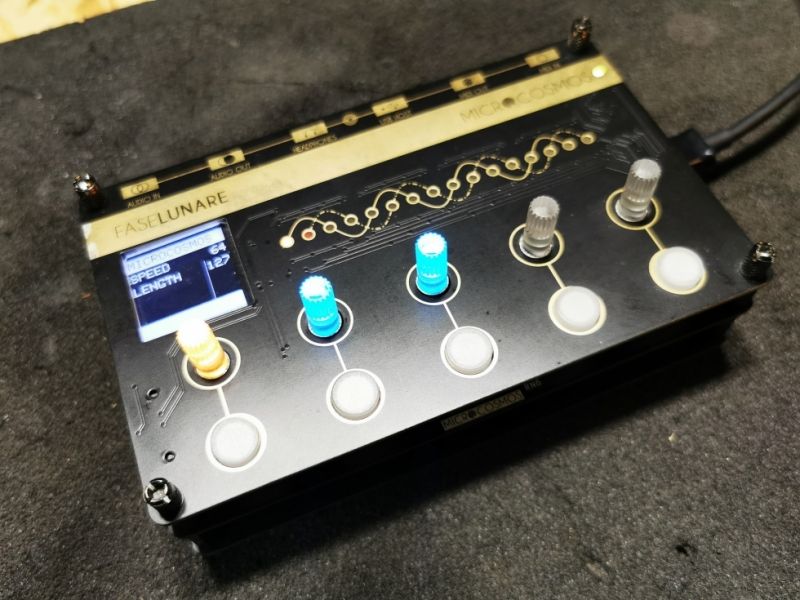 MICROCOSMOS is intended as a community driven project, it's open-source nature allows him to be used in many different contexts. In fact, Microcosmos was born thinking of 4 categories of users: - The Musician who knows nothing about code that by simply installing a DSP code produced by the community has a new instrument every day - The Musician Maker who wants to build his sound starting from the code without worrying about the hardware - The developer who wants to prototype a tool before working on the hardware to test its feasibility - The teacher and the student in the field of audio and signal processing. Microcosmos can be a Sampler, a Synthesizers, a MIDI Monitor, MIDI sequencer, a DRONE machine and more! By simply changing the software, you change the behaviour of the machine The rich supply of connections makes it suitable for any use. - Stereo Audio Input - Stereo Audio Output - MIDI IN and MIDI OUT (on universal trs 3.5 jack) - USB HOST - Onboard microphone - SD Card And also the completeness of the UI 1 OLED RGB Display 5 RGB Encoders with push buttons 5 Push buttons with leds 16+1 RGB leds

We have dealt with the academic world and one of the shortcomings that students often express is in the practical part of electronic realization. Usually simple circuits are made, on unstable breadboards that do not allow a real level of specialization and deepening. With the microcosmos this step is zeroed, the coder or the musician can concentrate only on the code. Thanks to the 600MHz ARM processor and memory expansions, it can be a long-lasting tool for learning and playing at the same time. Right now we are using it with FAUST as a DSP language but it can also be programmed in C ++ with the Arduino toolchain.

The possibility of having your own sound (or utility) in extremely portable hardware with the possibility of using it together with high-level instruments without losing quality. The freedom to create almost anything we have in mind.

Its Open-source nature involves the use of expansions (bluetooh modules, battery to make it portable, CV connections with the modular world etc ...). The commercial expansion, on the other hand, foresees the inclusion as a development and study tool at universities and dedicated specialization courses. We presented the Microcosmos at the International Faust Conference in 2020, where we had good feedback and where the FAUST inventors gave us maximum support. In 2021 the Microcosmos was chosen by the Audio Developer Conference and presented, also here, with great success and a lot of curiosity among the developers present.

Once the development phase is complete, the Microcosmos will be marketed as a pre-assembled unit, an online community will be created on our site where users can upload their 'DSPs' or download community and professionally produced ones. The complete project includes an online editor that can simplify the use of the Microcosmos. We are looking for investments to dedicate resources to the project
View Entry's Website
About the MIDI Association
MIDI Association IP Policy
MIDI Association Anti-Trust Policy