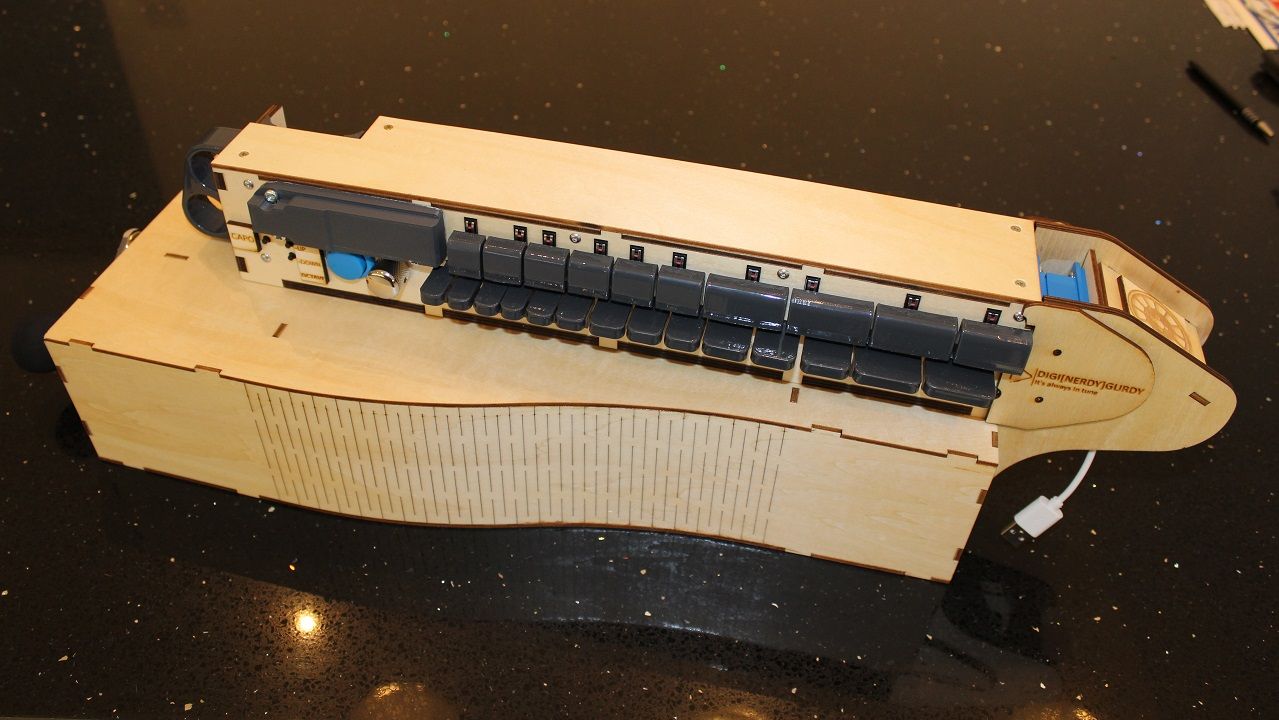 The Digi-Gurdy is a low-cost MIDI Hurdy Gurdy with many tuning options and a detachable playable keybox for maximum portability, allowing practice anywhere.

The hurdy-gurdy is an ancient musical instrument (10th century) with drones and melody strings bowed by a rotating wheel, played by pressing keys which contact them at different points. It has in recent times featured in TV series such as “Black Sails” and “The Walking Dead”. A major barrier for beginners is their high cost, built to order often with lead times of over a year. Rather like bagpipes, they are noisy when practicing. For pipers, affordable practice chanters and e-chanters are available, while no similar products or MIDI versions are available for the hurdy gurdy. The Digi-Gurdy has evolved through many iterations to give the best possible performance with a low build cost, includes development of a low-cost crank simulation mechanism. Digi-Gurdys are electronic devices, with correctly placed keys, that output MIDI via a USB cable to an attached or wirelessly-paired phone, iPad or PC running suitable MIDI player software, for practice anywhere using headphones. The current standard version has a detachable keybox, which is playable in its own right and fits in a bag, allowing practice anywhere. Additional variations of the design include a heavy metal styled version, an ultra-minimalist keybox-only version and one with a built-in sound card.

The Hurdy Gurdy is a complex instrument with keys, at least 6 strings and a crank mechanism to vibrate the strings. All of these parts have to be accurately made by a luthier and consequently even a budget instrument can be approximately £1500, mid-range approximately £4000 with high-end versions exceeding £10000. A MIDI Hurdy Gurdy is likely to be bought as a second practice instrument or as an initial entry into the Hurdy Gurdy world. The fact that it's a MIDI controller means that you can play hurdy-gurdy sounds but it also opens up a world of other sounds to gurdy players. All the innovations reflect a ruthless determination to keep the costs down and performance high. Open-Source: The design has developed over time and all variations of the laser cutting files, 3D print files and code have been made freely available online. Via a dedicated Facebook group, a group of enthusiasts has formed which is excellent for feedback on new ideas. Construction method and construction time: On the physical side this cost reduction has been achieved in three ways. Firstly the body is made of laser-cut ply with keys and fittings being 3D printed in ABS; secondly I have worked hard to bring down the build time as these are still hand assembled; thirdly the time spent on the internal wiring has been reduced by the design of a bespoke printed circuit board with holes through which the key stems pass. Key mechanism: In a real hurdy gurdy the keys are returned to their resting position partly by gravity and partly by recoiling from the strings against which they are pressed when playing. One innovation has been the use of small roller-microswitches acting on the 3D printed keys where the recoil of the microswitch arm and roller returns the keys to their resting position giving a nice feel at low cost. These microswitches are soldered directly to the PCB which lies behind the bank of keys. Software upgrade methods: The next innovation concerns practicalities of software and software upgrades. The microcontroller is an off the shelf product called a Teensy 3.5 board, made in the US. It is compatible with the well-known hobby Arduino ecosystem. The Teensy board is located under a removable cover on the front of the Digi-Gurdy. While electronics enthusiasts can load software upgrades directly, the non-enthusiast can simply unplug the entire Teensy board, about the size of a large postage stamp, and receive a new upgraded one by exchange of post. This may seem left-field but is an effective solution for some people and this is specifically why it is mounted on the front of the instrument. Crank mechanism: After trying several designs, the simplest proved to be the use of a hobby robot gearmotor. When turned by a crank handle, adapted from a fishing reel handle, it acts as a dynamo creating a voltage varying with rotation speed which can be measured by the Teensy microcontroller. This gives the best cost versus function of any method tried to simulate the crank, works well and is reliable. Detachable, playable, keybox: A Hurdy Gurdy has a keybox on the top acting on a set of strings. Underneath is a soundbox as you might find on a violin or small guitar with the crank handle on its right-hand end. The first Digi-Gurdy was conceived as an electronic keybox only, for maximum portability to learn some tunes on. I was challenged to design a version that was the same shape as a full sized gurdy, with crank. The current version is therefore two instruments in one as the keybox can be detached for portability and is still playable when removed from the main body of the Hurdy Gurdy. The final design of these laser cut panels was done by Jaap Brand who also sells a real Hurdy Gurdy made from laser cut parts. Power supply: For simplicity, the Digi-Gurdy is connected to an iPhone, iPad or PC (USB-MIDI) and is powered from that connected device. It therefore requires no batteries to run. MIDI versatility: The Digi-Gurdy connects via a USB lead to for example an iPad running software such as bs-16i. It can also be powered via the same lead so no internal power is required when operated in this way. However, there is also a 5 Pin traditional MIDI port which can also be used, for example with a wireless Bluetooth MIDI transmitter or regular MIDI cable. Tuning options: Hurdy Gurdys have many different potential tunings. The tunings can vary by the traditions of each country. For beginners a small set of pre-set tunings is offered via the OLED display, while more advanced users can benefit from a huge range of additional potential tunings all selected from intuitive on-screen menus. My own software has recently been superseded by that written by Basil Lalli, a new contributor to the project.

I built a special version of the Digi-Gurdy in reverse for someone who had played the Hurdy Gurdy for many years but had recently had a stroke affecting her ability to play the keybox with her left hand. She found that she could play better with a gurdy built with the crank on the left and keybox on the right and was very pleased with it. The heavy-metal styled version was designed to perhaps be more attractive to younger users and another happy person was a disabled ex-military man in the US who could not afford a real Hurdy Gurdy but was really pleased with the one I made for him in black with red highlights.

I already have a product range which all run essentially the same software: - The Digi-Gurdy is the traditional full-size Hurdy Gurdy styled version with crank mechanism. The keybox can be removed and is still playable when removed, giving you an option that is very portable. The target price for these would be approximately $500. - There is also a variation of this which is different in physical shape and this is the heavy-metal styled version, again this would be approximately $500. - For those on a limited budget I also make the Digi-Gurdy-Nano. This is a slimline keybox with no crank and is designed to be as compact and ultra-portable as possible for learning tunes on. Target price for this would be approximately $250 and it can be made in funky colours with laser-cut acrylic front and rear panels. - I am also working on another variation of the traditional design with an internal soundcard for those who want a totally self-contained instrument that they can just plug headphones into. This uses a commercial sound card and would be approximately $700. It also has USB-MIDI capability and a regular 5Pin MIDI-Out socket. The Nano version in particular would very much lend itself to be completely injection-moulded almost as the gurdy version of a small AKAI MIDI keyboard in concept. In use it would fill an equivalent role to the bagpipe practice electronic chanters that are commercially available.

The project is open-source but I am approached from time to time to build Digi-Gurdys as a hobbyist as personal sales to online friends, i.e. as a hobby project. Although an ancient European instrument, 90% of these approaches are from people in the US. The Facebook group so far has 651 members and this is with no active advertising of any sort whatsoever. I have my printed circuit boards made by an online company and my laser cutting has also all been sent out to a company with very competitive rates. I do have my own hobby laser cutter but to make all these parts myself I would need to upgrade to a larger machine, which I may well do at some stage. Once the 3D printed parts have been printed and all parts are before me, I can assemble a Digi-Gurdy in around 8 hours. As with many musical instruments the main cost is still the labour. I aim to sell them for around US$500. The next step would be to formally sell them via a webstore and perhaps sites such as Etsy. There is definitely interest out there in an instrument that has such an instantly-recognisable mediaeval sound harking back to ancient times. One remaining step to be overcome, which this competition process may facilitate, is that ideally the internal electronics needs to be formally be FCC certified (and CE or TUV in Europe), FCC initially as that seems to be the largest potential market. This could be relatively straightforward as the PCB contains switches only with no semiconductors, oscillators, or battery. To this PCB is plugged-in a completely standard Teensy 3.5 microcontroller board which is already made and FCC approved in the US. The only other main part is an OLED screen module driven from the Teensy board. However, I would definitely appreciate professional assistance with this process. I would then feel more able to formally set up a company, a web store and openly advertise and sell these instruments. To speed up production, a useful step would be to injection mould, rather than 3D print, all the plastic parts including the keys. Injection moulded parts are very low cost to produce however the up-front cost of the mould tools is high. A more affordable way to reduce build time would be to have all the microswitches pre-installed on the PCB with plug sockets to take ribbon cables from for example the OLED screen module and female header strips pre-installed to accept the Teensy boards. This would reduce the time it takes me to solder up and prepare each PCB.
View Entry's Website
About the MIDI Association
MIDI Association IP Policy
MIDI Association Anti-Trust Policy