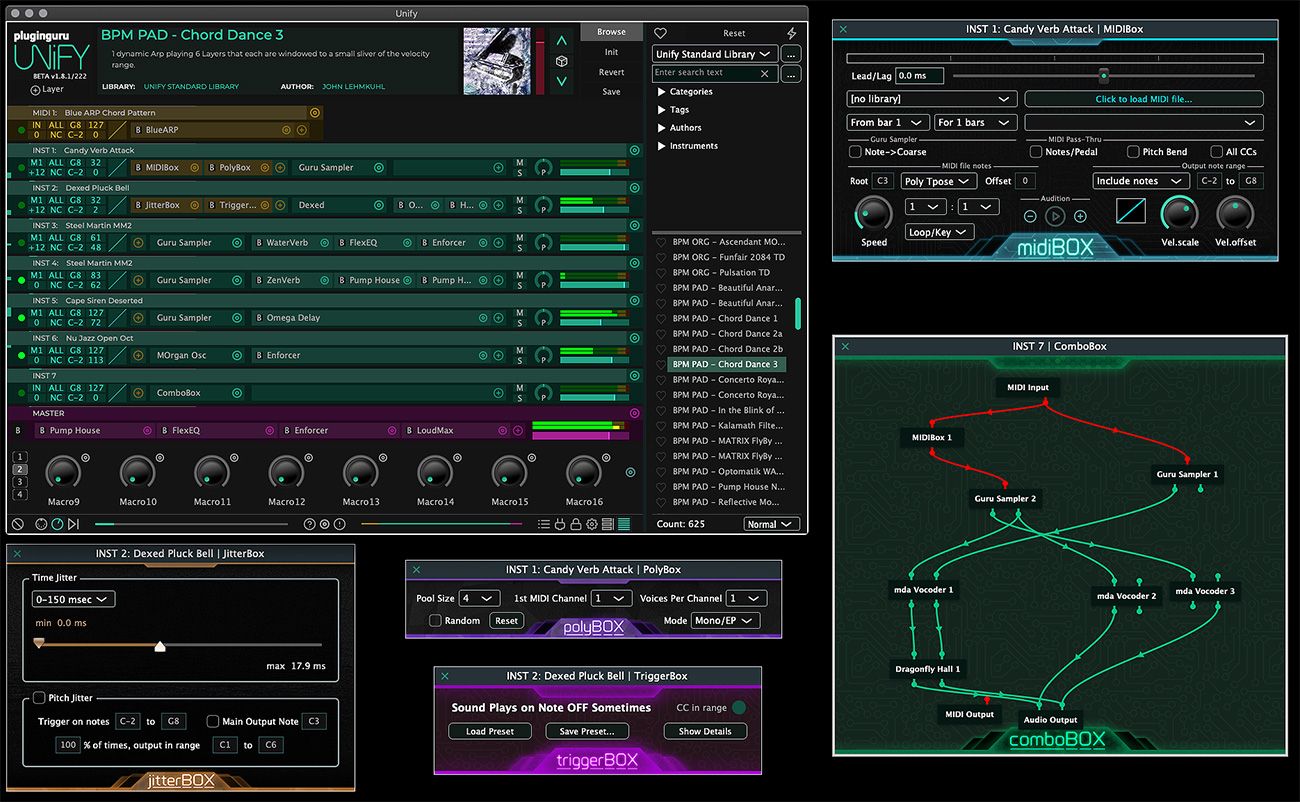 Unify brings the full power of MIDI to software plug-ins: Quick and easy layers, splits and arps, without the wires, live or in a DAW.

Unify is a multi-plug-in chaining tool in the same vein as Reason’s Combinator, Native Instruments’ Kore, etc., but not tied to any DAW or operating system. It provides a simple GUI to quickly create layered, split, and arpeggiated sounds, using its own collection of built-in and bundled plug-ins, together with every plug-in the user owns. It runs on Mac and Windows, either as a stand-alone app, or as a plug-in (AU, VST/VST3, AAX) in any DAW, and comes with over 600 factory patches playable without additional plug-ins. Each Unify patch is structured as zero or more MIDI-effect chains, feeding one or more instrument layers, mixed via zero or more aux-effect chains to a single master-effects chain. Each instrument layer consists of a chain of zero or more MIDI-effects, driving an instrument plug-in (which can even be an instance of Unify itself), and a chain of zero or more audio-effects. Each layer runs on its own CPU thread, providing excellent efficiency on today’s multi-core CPUs. A powerful macro system allows groups of plug-in parameters to be adjusted together, with custom response curves for each. Each single Unify patch is the equivalent, in software, of a whole rack of MIDI-connected gear, including all the connections, but it goes further by providing excellent support for MIDI-effect plug-ins, even in DAWs that support them clumsily or not at all. It provides MIDI capabilities that NO DAW currently offers, such as multiple arpeggiators each driving multiple instrument layers, playing monophonic instruments polyphonically, and using MIDI to achieve “wave sequencing” type effects by distributing input notes among multiple instruments. Unify 1.0 was introduced in January 2020, but its most innovative aspects have been added since January 2021, in a series of major updates: 1.1, 1.2, etc. to 1.8 today.

Unify’s most innovative aspects are its ability to load instances of itself, multi-threaded programming, and its macro system. Unify can load instances of itself as an instrument plug-in. Hence, hence entire patches can be loaded together into larger combination patches, and by switching the flow of MIDI to each layer on or off (under MIDI control), Unify can also serve as a very complete live performance rig. In a DAW, Unify allows loading whole collections of connected plug-ins into a single instrument-plug-in slot, but this is only practical because it can also ensure that enough processing power is available, by recruiting multiple CPU cores. Unify’s multi-threading means building multi-layer sound combinations in Unify is often more efficient than doing so inside individual plug-ins. Every Unify patch can include up to 32 “macro knobs”, each of which permits simultaneous adjustment of any number of parameters, each with its own custom response curve. The most innovative aspect is a hierarchical parameter selection system based on OSC-style “paths”, which allows targeting every parameter of every plug-in, and of Unify itself. Macros can be driven by any combination of mouse input, MIDI CC input, DAW automation, and OSC network control. Two of Unify’s built-in MIDI-effect plug-ins stand out as particularly innovative. MIDIBox is a MIDI arpeggiator which reads MIDI type-1 files and can play them in looped or one- shot modes. Its most innovative features are its ability to switch among tracks in real time (while remaining tempo-locked), and its ability to play monophonic sequences polyphonically (the sequence is transposed once per each input MIDI note), and the ability to adjust the timing of sequenced events to lead the beat as well as lag it, which is particularly useful to compensate for the inherent lag of sampled instruments (which do not “speak” directly on the beat).   PolyBox provides various algorithms to distribute input MIDI-events among multiple instrument layers, allowing monophonic instrument plug-ins to be played polyphonically (input notes distributed to multiple identical layers), and permitting creative temporal effects similar to wave-sequencing (notes from an arpeggiator are played on multiple instruments at different times).

Most inspiring use is when Unify has loaded all of a customers 250 plug-ins and can now combine any of them to create something new and special - plus with the ability to load any patch into your current patch, using preset patches is truly inspiring to work with.

We have some plans for the future in the works, absolutely.