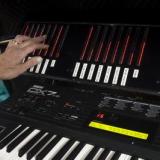 george
Saturday, 15 August 2020
1 Replies
6.7K Visits
15
Votes
Undo
Subscribe
I wanted the best of both worlds: patch presets, and real-time controls. I wanted to be able to call up a patch, and have all the controls fully live, already reflecting the settings dictated by the recalled patch parameters. Basically, like having motorized faders, but no moving parts. With all the parameter information to & from the instrument to be midi, of course.