Make quantization work for you, not against you

Quantization is the process of moving MIDI data (usually notes, but also potentially other data) that's out of time to a rhythmic "grid." For example, if a kick drum is slightly behind the beat, quantization can move it right on the beat. Quantization was controversial enough when it was limited to MIDI, but now that you can quantize audio, it's even more of an issue. Although some genres of music—like electro and other EDM variants—work well with quantization, excessive quantization can compromise a piece of music's human feel.

Some people take a "holier than thou" approach to quantization by saying it's for musical morons who lack the chops to get something right in the first place. These people, of course, never use quantization...well, at least while no one's looking. But quantization has its place; it's the ticket to ultra-tight grooves, and a way to let you keep a first and inspired take, instead of having to play a part over and over again to get it right—and lose the human feel by beating a part to death. Like any tool, quantization can be used or misused, so let's concentrate on how to make quantization work for you—and avoid giving an overly rigid, non-musical quality to your work.

Computers are terrible music critics. Forcing music to fit the rhythmic criteria established by a machine is silly—it's real people, with real emotions, who make and listen to music. To a computer, having every note hit exactly on the beat may be desirable, but that's not the way humans work.

There's a fine line between "making a mistake" and "bending the rhythm to your will." Quantization removes that fine line. Yes, it gets rid of the mistakes, but it also gets rid of the nuances.

When sequencers first appeared, musicians would often compare the quantized and non-quantized versions of their playing. Invariably, after hearing the quantized version, the reaction would be a crestfallen "gee, I didn't realize my timing was that bad." But in many cases, the human was right, not the machine. I've played some solo lines were notes were off as much as 50 milliseconds from the beat, yet they sounded right. Tip #1: You dance; a computer doesn't. You are therefore much more qualified than a computer to determine what rhythm sounds right.

WHY QUANTIZATION SHOULD BE THE LAST THING YOU DO

Some people quantize a track as soon as they've finished playing it. Don't! In analyzing unquantized music, you'll often find that every instrument of every track will tend to rush or lag the beat together. In other words, suppose you either consciously or unconsciously rush the tempo by playing the snare a bit ahead of the beat. As you record subsequent overdubs, these will be referenced to the offset snare, creating a unified feeling of rushing the tempo. If you quantize the snare part immediately after playing, then you will play to the quantized part, which will change the feel.

Another possible trap occurs if you play several unquantized parts and find that some sound "off." The expected solution would be to quantize the parts to the beat, yet the "wrong" parts may not be off compared to the absolute beat, but to a part that was purposely rushed or lagged. In the example given above of a slightly rushed snare part, you'd want to quantize your parts in relation to the snare, not a fixed beat. If you quantize to the beat the rhythm will sound even more off, because some parts will be off with respect to absolute timing, while other parts will be off with respect to the relative timing of the snare hit. At this point, most musicians mistakenly quantize everything to the beat, destroying the feel of the piece. Tip #2: Don't quantize until lots of parts are down and the relative—not absolute—rhythm of the piece has been established.

The best approach is to go through a piece, a few measures at a time, and quantize only those parts that are clearly in need of quantization—in other words, they sound wrong. Very often, what's needed is not quantization per se but merely shifting an offending note's start time. Look at the other tracks and see if notes in that particular part of the tune tend to lead or lag the beat, and shift the start time accordingly. Tip #3: If it ain't broke, don't fix it. Quantize only the notes that are off enough to sound wrong.

Modern-day quantization tools, whether for MIDI or audio, offer many options that make quantization more effective. One of the most useful is quantization strength, which moves a note closer to the absolute beat by a particular percentage. For example, if a note falls 10 mlliseconds ahead of the beat, quantizing to 50% strength would place it 5 milliseconds ahead of the beat. This smooths out gross timing errors while retaining some of the original part's feel (Fig. 1). 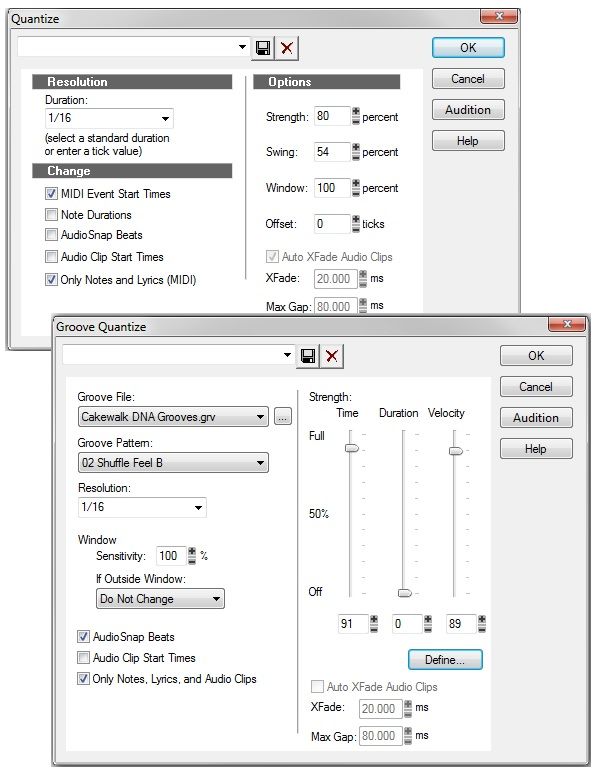 Fig. 1: The upper window (from Cakewalk SONAR) shows standard Quantization options; note that Strength is set to 80%, and there's a bit of Swing. The lower window handles Groove Quantization, which can apply different feels by choosing a "groove" from a menu.

Some programs offer "groove templates" (where you can set up a relative rhythm to which parts are quantized), or the option to quantize notes in one track to the notes in another track (which is great for locking bass and drum parts together). Tip #4: Study your recording software's manual and learn how to use the more esoteric quantization options.

Here's an experiment I like to conduct during sequencing seminars to get the point across about quantization strength.

First, record an unquantized and somewhat sloppy drum part on one track. It should be obvious that the timing is off.

Then copy it to another track, quantize it, and play just that track back; it should be obvious that the timing has been corrected. Then copy the original track again but quantize it to a certain strength—say, 50%. It will probably still sound unquantized. Now try increasing the strength percentage; at some point (typically in the 70% to 90% range), you'll perceive it as quantized because it sounds right. Finally, play back that track along with the one quantized to 100% strength and check out the timing differences, as evidenced by lots of slapback echoes. If you now play the 100% strength track by itself, it will sound dull and artificial compared to the one quantized at a lesser strength. Tip #5: Correct rhythm is in the ear of the beholder, and a totally quantized track never seems to win out over a track quantized to a percentage of total quantization.

Yes, quantization is a useful tool. But don't use it indiscriminately, or your music may end up sounding mechanical—which is not a good thing unless, of course, you want it to sound mechanical!