In November of 2018 we uncovered some unique historical MIDI documents.  These were discovered in a file cabinet at Yamaha Corporation of America's headquarters in Buena Park, California.  These documents pre-date the formation of the MIDI Manufacturers Association and give us a truly remarkable look into the the early development of MIDI. There were three key documents. The first is a very early version of the MIDI 1.0 specification from August 1983. We also uncovered two issues of the IMA bulletin- one from June 1985 and another from June 1987.

The copyright of this early MIDI 1.0 specification is assigned to the International MIDI Association based in Sun Valley. 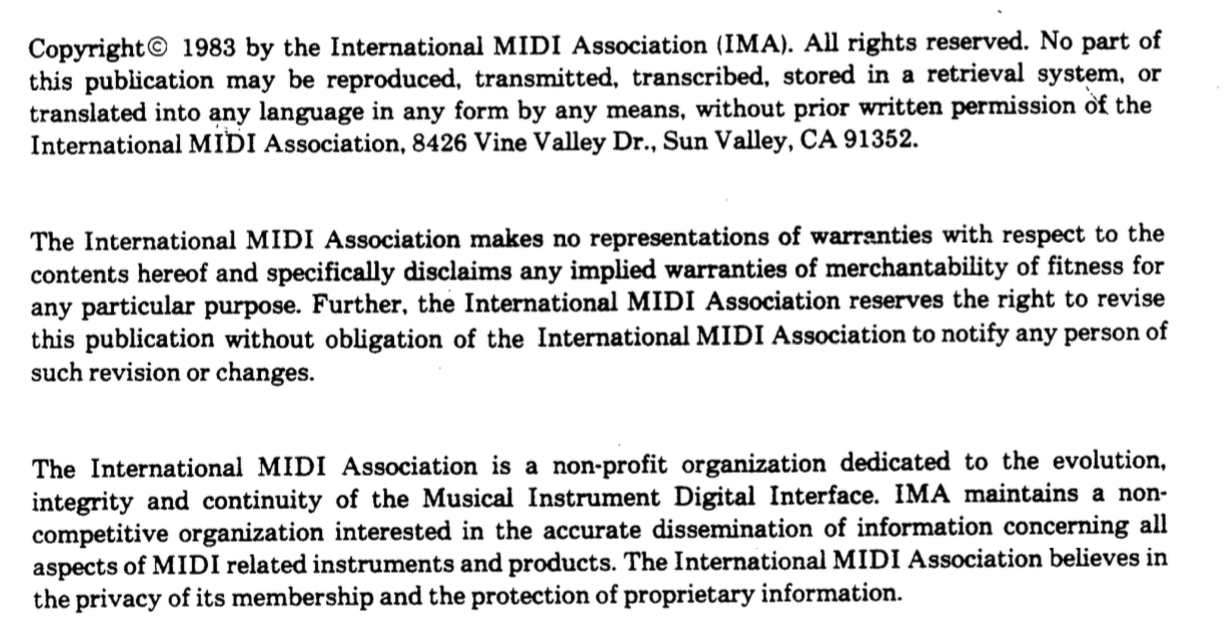 by Craig Anderton for Harmony Central

This document clearly shows that even in August of 1983 the MIDI specification was still in flux and had not been fully flushed out. For example, Continuous Controllers 64-95 are defined simply as Switches (On/Off). 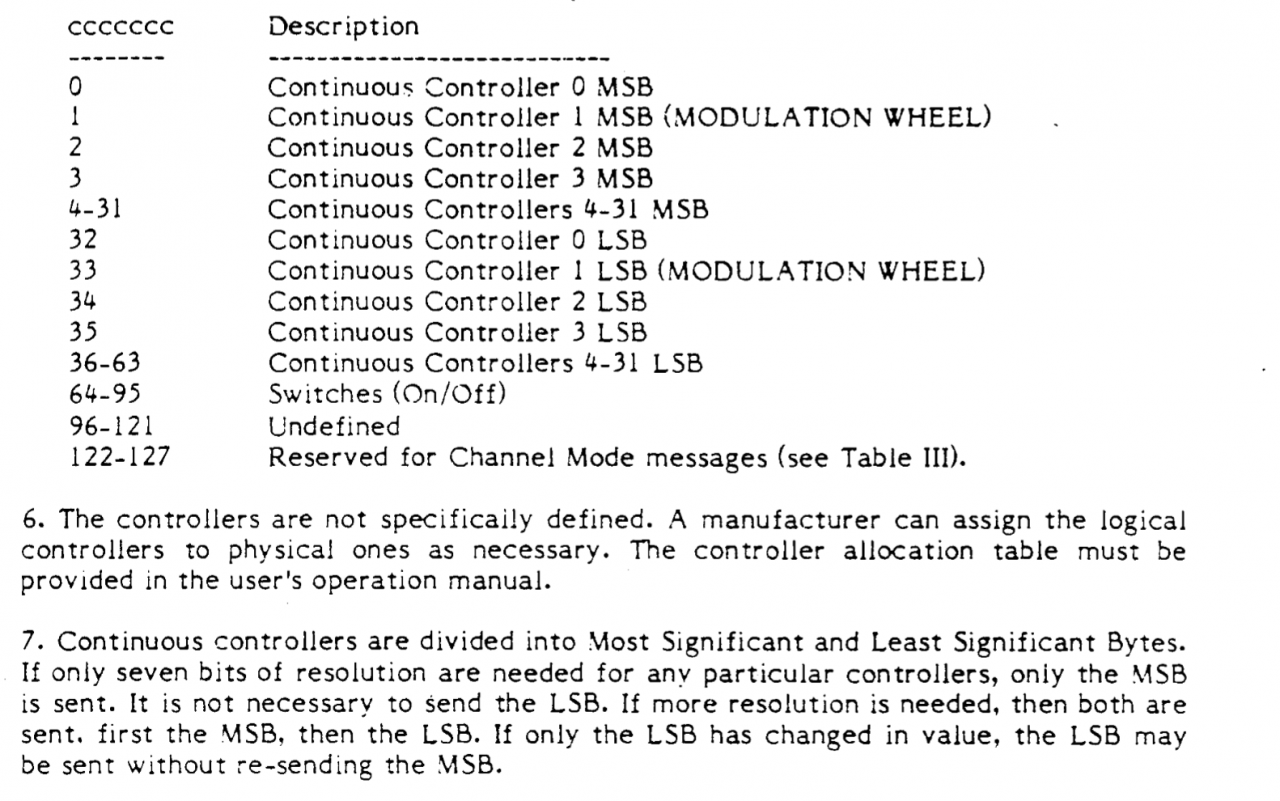 This also shows that at this stage, there was clearly a desire for 14 bit resolution of continuous controllers in MIDI 1.0.

Here is a list of the orginal 14 companies that were involved with MIDI at the time.  Notice that both Big Briar (Bob Moog's company after he left Moog) and Moog Music (owned at the time by Norlin) are listed.  Many people underestimate Bob Moog's role in MIDI gaining acceptance. 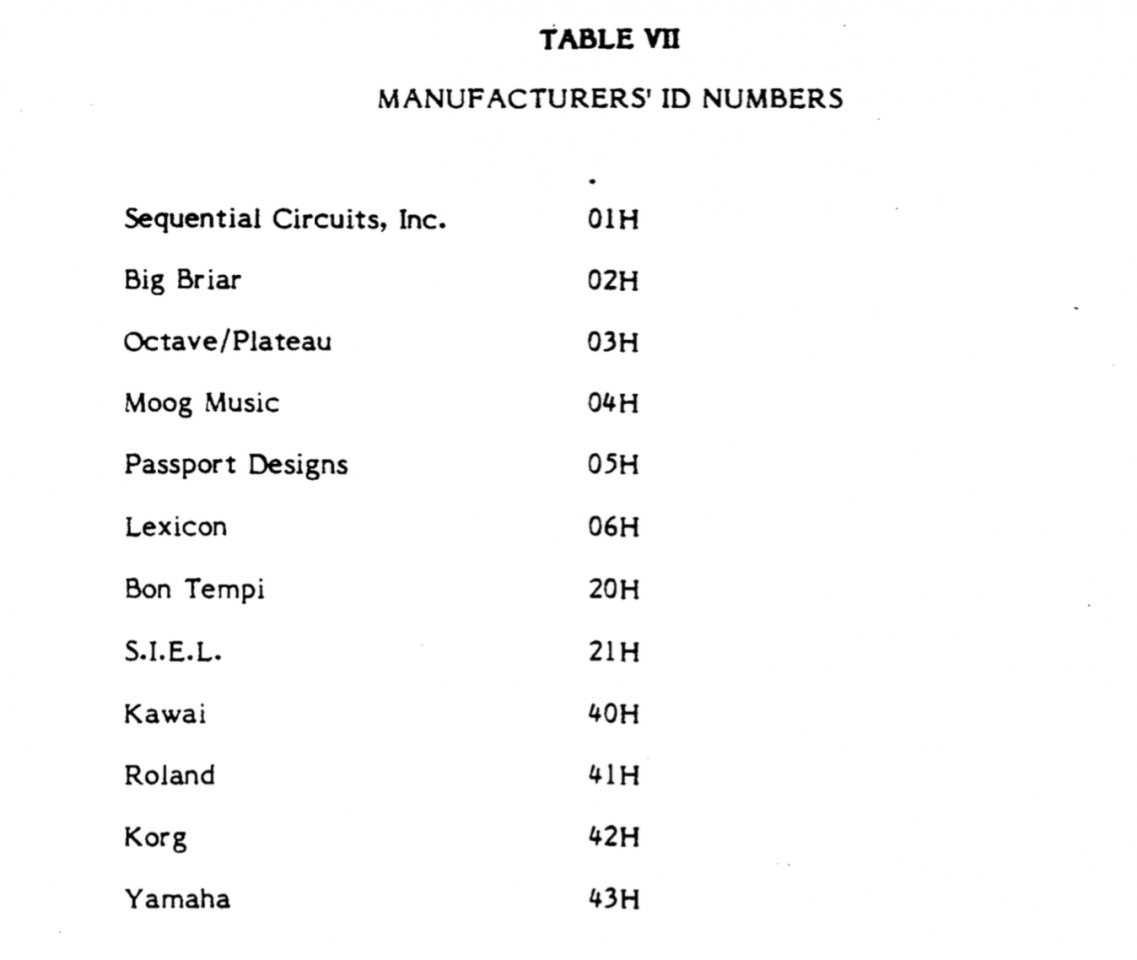 This version of the MIDI spec also featured a MIDI logo that was never used in later official specifications from the MIDI Manufacturers Association. 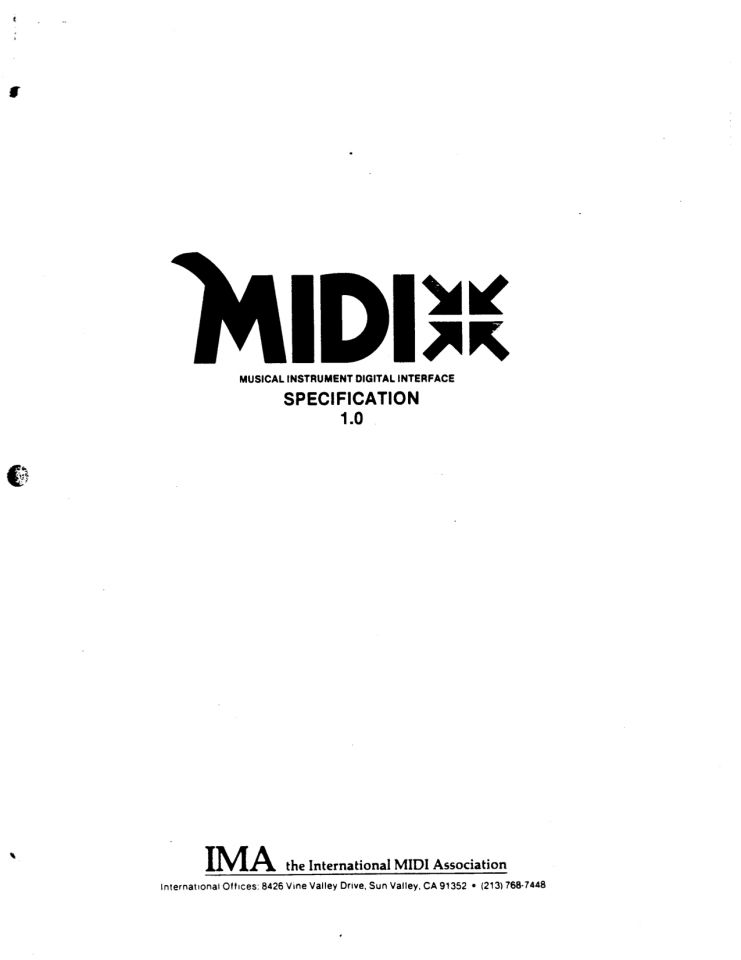 The second IMA News Bulletin published in June of 1985 and announced a variety of new MIDI products including the Simmons SDS-9 electronic drum kit. 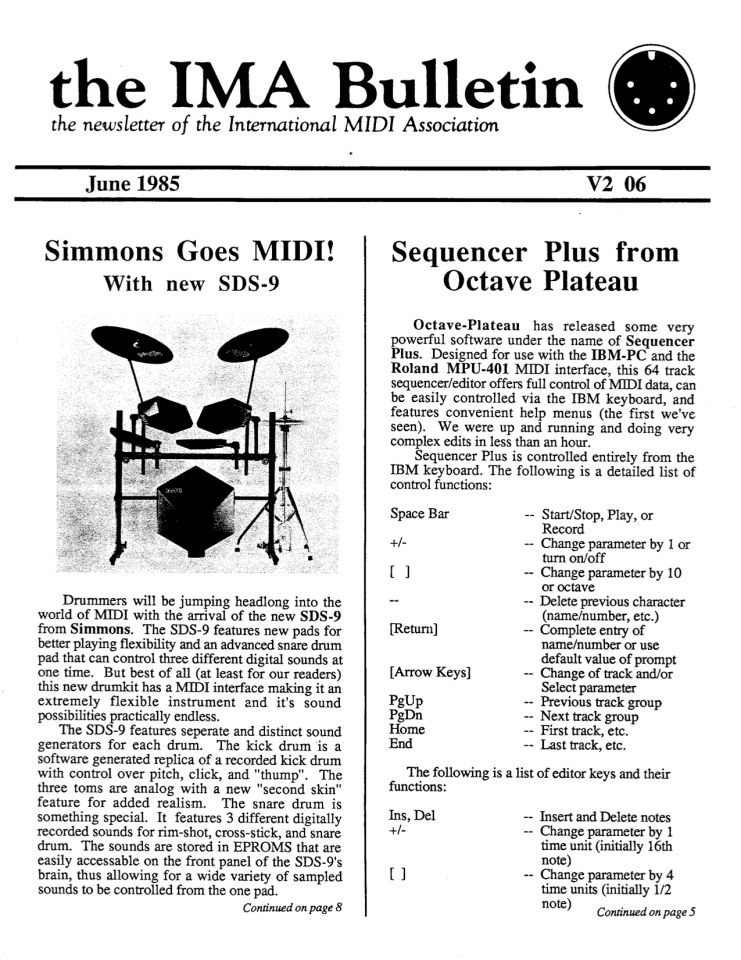 The same issue announced the first publicized meeting of the MIDI Manufacturers Association at the upcoming New Orleans Summer NAMM show on June 24, 1985. What's most interesting about this announcement is that announces a "new MIDI 1.0 specification" that was authored by the Japan MIDI Standards Committee and translated from the Japanese by the MMA, and the creation of the standardized MIDI implementation chart. This is a full two years AFTER the initial public demo in January of 1983 and the first version of the MIDI spec was distrubuted by the IMA.

The new "detailed" MIDI specification was created to solve problems that companies had understanding the initial specification. The original MIDI 1.0 Specification was written by companies collaborating outside of any organization, and though JMSC, MMA, and IMA all formed to help manage the development of MIDI, they all formed independently, and it took a few years before they all figured out how to move forward in "unison".

The International MIDI Association ("IMA") (a.k.a. "MUG or MIDI Users Group" and "IMUG" International MIDI User Group), was the first to form. It was a self-appointed organization to manage the development and promotion of MIDI.  The IMA MIDI Spec document dated August 5 1983 is the one that was registered with the United States Copyright Office by the IMA as the official MIDI 1.0 Specification. IMA got the initial spec from Sequential, who had also been distributing prior versions of the spec.

The Japanese companies who were building MIDI products at that time realized when they started implementing the MIDI initial 1.0 Spec that more detail was needed, and took on the task of producing an addendum document.. They formed the JMSC, which officially launched in Nov. 1983. Originally JMSC included end-users, but they abandoned that idea within the 1st year. By June of 1984 they informed the IMA that they were working on a "detailed explanation" which they would share when it was completed. They also recommended "US and European" manufacturers have their own association, separate from end-users.

The decision to form the MMA was made at the June 1984 NAMM show in Chicago by Roland US, Yamaha US, Sequential, and Oberheim, and a meeting "of all interested companies" that was held. The MMA's legal documents (articles of incorporation and bylaws) did not get completed and filed until 1987, but the association's organizers used the name "MMA" starting from June 1984. At the February 1985 Winter NAMM Show the organizers of MMA (now about 14 companies in total) met and declared one of MMA's goals to be to "prepare and release an official and complete documentation to the MIDI 1.0 Specification, including the specification, detailed explanations, and a guide to creating implementation charts". They also decided the policies and procedures for membership, and began subscribing new members. The IMA Bulletin refers to June 1985 as the "first MMA meeting" because that is how the meeting was announced by MMA to prospective MMA members.

The "detailed explanation" they refer to is the work that JMSC had created. At that same meeting Chris Meyer was appointed Chairman of the MMA "Technical Standards Board", and one of the TSB's tasks was to work with JMSC to finish the "1.0 Explanations". The document received input from both JMSC and MMA members, although it was written in Japanese by JMSC, which is why it needed to be translated. After that experience, it was agreed that all future specifications (including updates) would be authored in English, so they could be more easily shared during development.

It is pretty hard to follow all the three letter acronyms and the time line so here is a simpifed version. 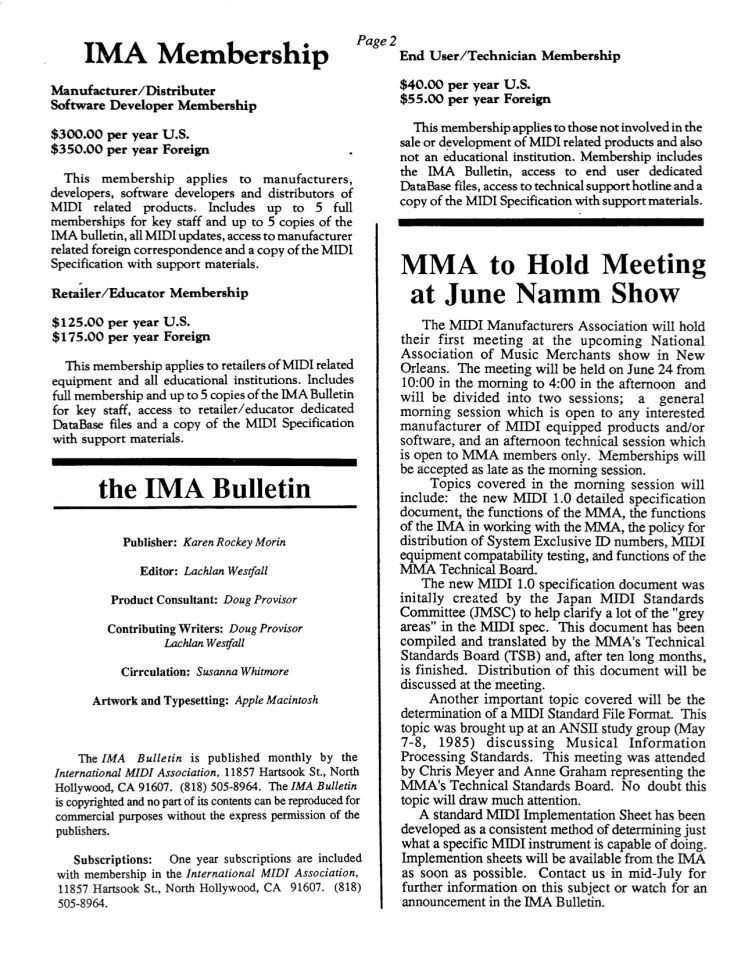 It seems that there has always been a need for the people who work, play and create with MIDI to have a way stay in touch with the MIDI companies who push the specifications forward.  We encourage our MIDI Association members to express their opinions about where MIDI should go in the future.

Tweet
Heavy Metal MIDI by Author and Punisher
May 31-And the Tips Keep Coming!