May 26-Why ReWire Is Very Cool ReWire is a software protocol that allows two (or sometimes more) software applications to work together as one integrated program. For example, suppose you wish your DAW of choice had Propellerhead Reason's roster of way cool virtual instruments, but you don't want to learn a different DAW. No problem: use ReWire with your DAW, and get Reason into the mix.

ReWire requires a client application (also called the synth application) that plugs into a ReWire-compatible host program (also called the mixer application) such as Cakewalk, Cubase, Digital Performer, Live, Logic, Pro Tools, Samplitude, Studio One Pro, etc. In the host, you'll have an option to insert a ReWire device. The process is very much like inserting any virtual instrument, except that you're plugging in an entire program, not just an instrument. You usually need to open the host first and then any clients, and close programs in the reverse order. You won't break anything if you don't, but you'll likely need to close your programs, then re-open them in the right order. 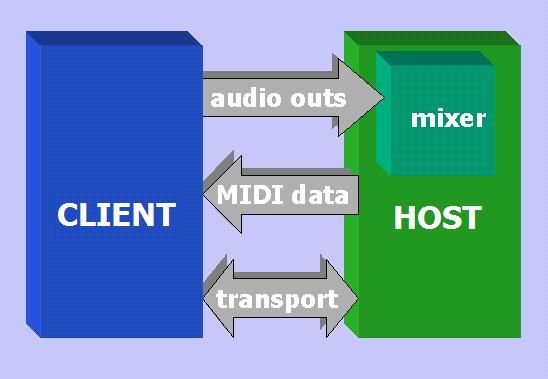 ReWire sets up relationships between the host and client programs.

Here's how the client and host work together.

Rewire is an interconnection protocol that doesn't require much CPU power, but note that you'll need a computer capable of running two (possibly powerful) programs simultaneously. Fortunately most modern computers can indeed handle ReWired programs, so find out for yourself what this protocol can do.