As electricity became more widely available, the early 20th century saw the invention of electronic musical instruments including the Telharmonium, Trautonium, Ondes Martenot, the Theremin and the Hammond organ.

What is interesting in looking at these early devices is how much they foreshadow the future of modern music production.

The Teleharmonium foreshadows both the Hammond organ and music streaming services.

The Theremin foreshadows many BLE MIDI controllers of today by allowing gestural control of music without wires.

The design goals that RCA had with their room sized modular synthesiser foreshadows current advances in AI technology, orchestral Software Synthesizers, and the recent resurgence in the popularity of modular synthesis.

For information on other early electronic musical instruments like the Trautonium and Ondes Martenot and for more details on the Telharmonium, Theremin and Hammond organ, please visit the website below.

Special thanks to 120 years

120years is an amazing website run as a labor of love by Simon Crab and is a fantastic resource for information on early electronic instruments.  We encourage you to visit the site and donate to support it. Many of the images and information below are from Simon's website and we wanted make sure he got proper credit.

The Teleharmonium was huge. You can get an idea of how big it is by this picture of a small boy next to one of the Teleharmonium's tone wheels. It had to be that big and use incredible amounts of electrical power because the amplifier had not been invented yet.

The Teleharmonium was not only one of the first electronic musical instruments, it was also the first music streaming service. It actually streamed the synthesized music via wires.   This would eventually lead to it's downfall.

Courtesy of Scientific American and 120Years

THE TELHARMONIUM – AN APPARATUS FOR THE ELECTRICAL GENERATION AND TRANSMISSION OF MUSIC.

Dr. Thaddeus Cahill's system of generating music at a central station in the form of electrical oscillations, and of transmitting these oscillations by means of wires to any desired point, where they are rendered audible by means of an ordinary telephone receiver or a speaking arc, is now embodied in a working plant situated in the heart of New York.

Briefly summed up, Dr. Cahill's wonderful invention consists in generating electrical oscillations corresponding in period with the acoustic vibrations of the various elemental tones desired, in synthesizing from these electrical vibrations the different notes and chords required, and in rendering the synthesized electrical vibrations audible by a translating device.
by Scientific American' vol 96 #10 9th March 1907

The reason for the failure of Cahill's project were numerous. The machine itself was impossibly expensive; about $1 million was spent from 1897 to 1914 on the project ( approximately $30 million in today's value) and it was unlikely that a subscriber business model would have ever covered the costs, let alone make a profit – and, even if Cahill had found enough subscribers, he'd have to have built a power plant to generate enough power.

The output power of the Telharmonium caused great disruption of the New York Telephone network, angering telephone subscribers and even interrupting the Stock Exchange, which resulted eventually in AT&T refusing to co-operate in supporting Cahill's instrument.

The Telharmonium was also a victim of an age of rapid technical advances; Lee De Forest began experimenting with radio transmissions as early as 1906 (which included transmissions of the Telharmonium) and by around 1914 wireless radio broadcasts had spelled the end for wire broadcasting.

The original Theremin used a foot pedal to control the volume and a switch mechanism to alter the pitch.

This prototype evolved into a production model Theremin in 1920, this was a unique design, resembling a gramophone cabinet on 4 legs with a protruding metal antennae and a metal loop. The instrument was played by moving the hands around the metal loop for volume and around the antennae for pitch. The output was a monophonic continuous tone modulated by the performer. The timbre of the instrument was fixed and resembled a violin string sound.

The sound was produced directly by the heterodyning combination of two radio-frequency oscillators: one operating at a fixed frequency of 170,000 Hz, the other with a variable frequency between 168,000 and 170,000 Hz. The frequency of the second oscillator being determined by the proximity of the musician's hand to the pitch antenna. The difference of the fixed and variable radio frequencies results in an audible beat frequency between 0 and 2,000 Hz. The audible sound came from the oscillators, later models adding an amplifier and large triangular loudspeaker.

This Theremin model was first shown to the public at the Moscow Industrial Fair in 1920 and was witnessed by Lenin who requested lessons on the instrument. Lenin later commissioned 600 models of the Theremin to be built and toured around the Soviet Union.

The Theremin in pop music and culture

The Theremin was marketed and distributed in the USA by RCA during the 1930's as a DIY kit form or as a finished instrument ( later aficionados of the instrument included Robert Moog who made and sold transistorised Theremins in the 1950s). The heterodyning vacuum tube oscillator became the standard method of producing electronic sound until the advent of the transistor in the 1960's and was widely used by electronic musical instrument designs of the period.

The Theremin became known in the USA as a home 'novelty instrument' and featured in many film soundtracks of the 1940-50's, it also appeared in several pop records of the 1960's but never overcame it's novelty appeal; used for effect rather than as a 'serious instrument', most recordings employ the Theremin as a substitute string instrument rather than exploiting the microtonal and pitch characteristics of the instrument.

In 1932, Leon Theremin developed another innovative electronic musical instrument - The Rhythmicon for composer Henry Cowell. The device could produce sixteen different rhythms and which were also transposable. This was the world's first drum machine.

It used cylindrical disks that in some ways are the same mechanism as music boxes or piano rolls.

In 1935, Laurent Hammond, who had been a clock maker came up with a design and patented an "electrical musical instrument".  It was based on the same technology in the Teleharmonium, but could be much smaller because of the invention of the amplifier.

Thaddeus Cahill, developer of the Telharmonium, was . . . endowed with the ability to think big. Although not strictly electronic (it predated the invention of the vacuum tube by about a decade), the Telharmonium embodied many basic principles that have been used in the electronic music medium: the generation of pitched tones from alternating electricity, the addition of harmonics to determine tone color (additive synthe- sis), and a touch sensitive keyboard to shape the sounds and control their strengths. This first polyphonic, touch sensitive music synthesizer remained in service in New York for only a few years . . . The basic idea was resurrected again in the 1930s in an instrument that was somewhat more of a commercial success: the Hammond Organ

by Robert A. Moog,"ElectronicMusic,"Journal of the Audio Engineering Society, October/November 1977

The Hammond organ was a commercial success- first in churches and then in jazz clubs where musicians like Jimmy Smith made it popular. 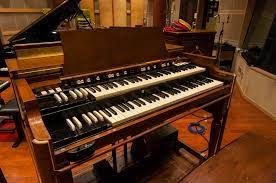 B3 courtesy of Wikipedia

Hammond was inspired to create the tonewheel or "phonic wheel" by listening to the moving gears of his electric clocks and the tones produced by them.

The RCA Mark II Synthesizer at the Columbia-Princeton Electronic Music Center at Columbia’s Prentis Hall on West 125th Street in 1958.

In the 1950's RCA was one of the largest entertainment conglomerates in the United States; business interests included manufacturing record players, radio and electronic equipment (military and domestic – including the US version of the Theremin) as well as recording music and manufacturing records.

In the early 50's RCA initiated a unusual research project whose aim was to auto-generate pop 'hits' by analysing thousands of music recordings; the plan being that if they could work out what made a hit a hit, they could re-use the formula and generate their own hit pop music.

The project's side benefit also explored the possibility of cutting the costs of recording sessions by automating arrangements and using electronically generated sounds rather than expensive (and unionised) orchestras; basically, creating music straight from score to disc without error or re-takes.

It's interesting to view the quote from 120years in the context of recent advances in AI technology, DAWs and soft synth technologies .   The MIDI Association has covered many of the efforts to auto generate music by analysing recordings mainly because many companies use MIDI data as the input to train their AI models. On top of that, with the advent of VSTs and orchestral libraries,  more and more recording are created using virtual instruments.

So MIDI has in many ways made RCA's vision of the future come true.

The RCA synthesizer is recognized as the first programmable polyphonic synthesizer.  It was programmed with coded punch paper rolls that look strangely similar to the paper rolls from player pianos and the piano roll editors found in almost every modern digital audio workstation  Below is a schematic of the modular elements of the RCA synthesizer that took up an an entire room in Columbia's Prentis Hall.

Raymond Scott with his invention the Clavivox

No discussion of electronic music would be complete without mentioning Raymond Scott.

He was born in 1908 and in 1934 was hired as the staff pianist for the CBS Radio Orchestra.  Soon after he has his first hit as a composer "Christmas Night in Harlem".

In 1942, he broke the color barrier by forming the first racially-mixed network radio orchestra (including Ben Webster, Emmett Berry, Charlie Shavers, Cozy Cole, and others).

He is important in the history of electronics music for many, many reasons.

He is credited with being the first in the world to develop:

Raymond Scott was hired by Berry Gordy of Motown in 1970 as Director of Electronic Music Research and Development, and his jazz compositions are quoted or used outright in many of Warner Brother's cartoon themes. Close to the end of his life (he passed away in

He also inspired a young Bob Moog. Check out this article from the Raymond Scott Website.

After his retirement, Scott used MIDI technology to continue composing until 1987, when he suffered the first of several debilitating strokes. Raymond Scott died in 1994.

The Wurlitzer Side Man generated sounds the same way the music boxes and the Rhythmicon did by using rotating disc.  There was also a slider to control the tempo (between 34 and 150 beats per minute). One other innovation of the Sideman which became a standard feature of drum machines is that the sounds can also be triggered individually by buttons on the front panel.

In 1963, Robert Moog was going to change the face of synthesis for ever by taking the synthesizer out of the university laboratory and putting it in the hands of musicians.

In the next chapter of the history of MIDI, we will look at the sonic pioneers who explored how to build modular programmable synthesizers, drum machines, and sequencers and started the modern music production revolution that is still very much alive today.