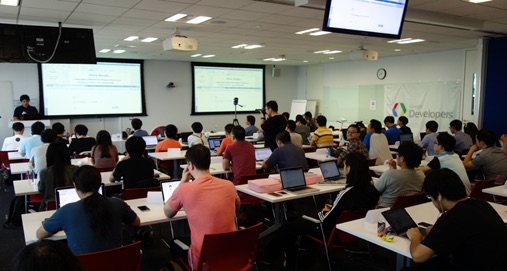 A special Web Audio/MIDI Hackathon was organized for web developers by Google at the Google Shanghai office. More than 70 developers from across China, from as far as Beijing and Zhangjiakou in northern China, and even a developer from the Netherlands, came to attend the event, which was lead by Ryoya Kawai and Encai Liu of Yamaha, to train the developers about Web Audio and Web MIDI APIs. Bill Luan from Google's Developer Relations team provided developers with MIDI devices to use (courtesy of Google, Yamaha, Korg, and CME). At the Hackathon, Mr. Kawai and Mr. Liu answered many questions from developers. Some of the developers attending the event demonstrated existing applications, from music-making to art installations, all using MIDI and audio technologies, to inspire others for the development. Attendees were eager to get their application completed for the contest, which will be judged by music and web industry experts from Yamaha, MMA, and Google.