One of the biggest recent developments in MIDI is MIDI Polyphonic Expression (MPE). MPE is a method of using MIDI which enables multidimensional controllers to control multiple parameters of every note within software. 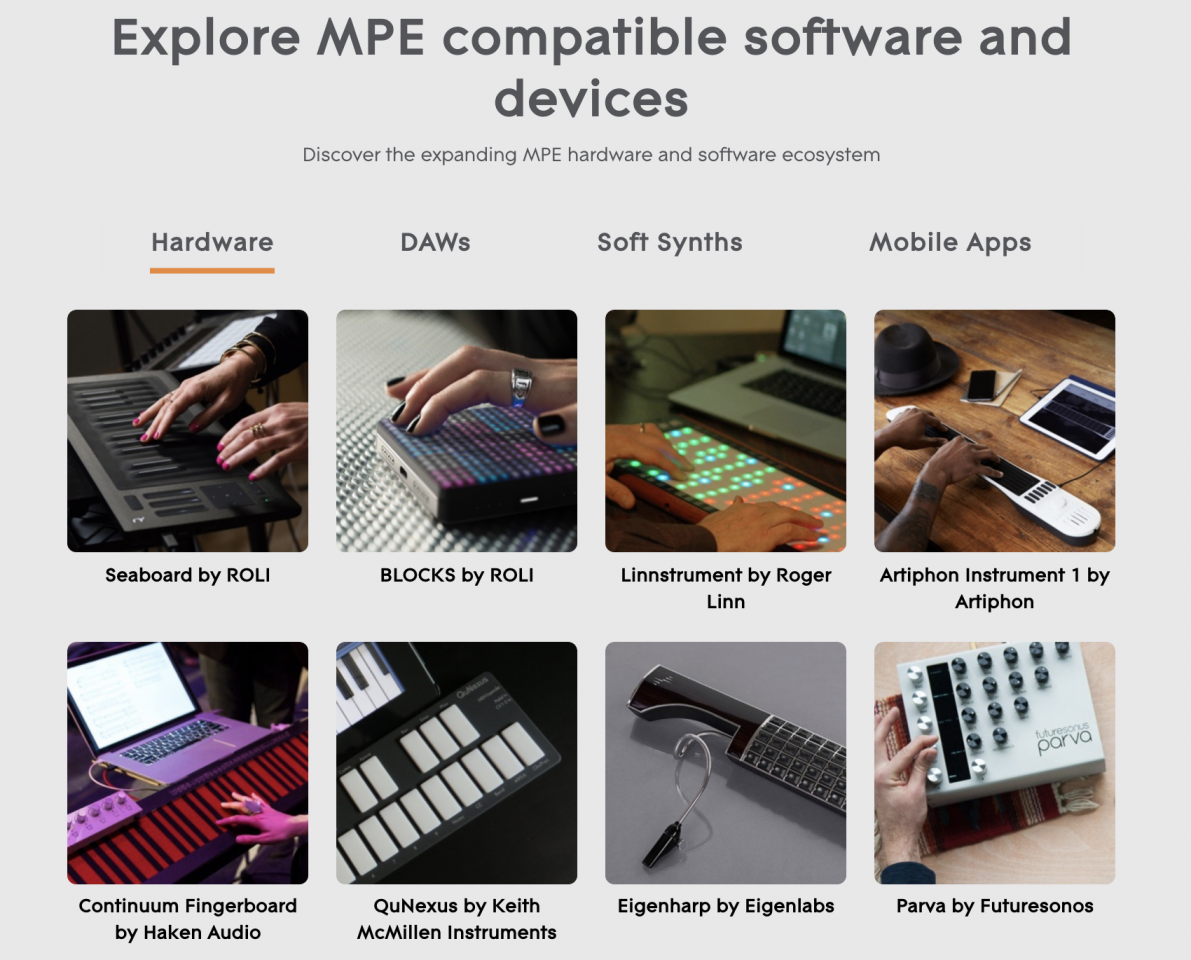 The ROLI Seaboard GRAND, Seaboard RISE, and BLOCKS – including the Seaboard Block and Lightpad Block – send standard MIDI messages and can be used with any software or hardware instrument that responds to these messages.

To take advantage of the five dimensions of touch the GRAND, RISE, and BLOCKS use MPE – MIDI Polyphonic Expression. This page lists MPE-compatible synthesizers and links to guides on using them with the Seaboard RISE, Seaboard GRAND, and BLOCKS.

Check out all the information that ROLI has assembled on over 100 products from different companies that support MIDI Polyphonic Expression.

Prior to MPE, expressive gestures on synthesizers—such as pitch bending or adding vibrato—affected all notes being played. With MPE, every note a musician plays can be articulated individually for much greater expressiveness.

In MPE, each note is assigned its own MIDI Channel, so that Channel-wide expression messages can be applied to each note individually. Music making products (such as the ROLI Seaboard, Moog's Animoog, and Apple's Logic) take advantage of this so that musicians can apply multiple dimensions of finger movement control: left and right, forward and back, downward pressure, and more.

MMA President Tom White notes that "The efforts of the members (companies) of MMA has resulted in a specification for Polyphonic Expression that provides for interoperability among products from different manufacturers, and benefits the entire music industry."

Jean-Baptiste Thiebaut of ROLI concurs. "The MPE specification paves the way for a new generation of expressive controllers and music software, providing many creative opportunities for live musicians and producers. MPE remains fully compatible with MIDI."

The MPE specification will be available for download in the coming weeks. To obtain a free copy, join the MIDI Association, the global community of people who work, play and create with MIDI, at www.MIDI.org.

The Basic Features of MPE

(Reprinted from the MIDI Manufacturers Association MPE Specification document's Background Section)
(Note: not all devices may support all features)

The MPE specification aims to provide an agreed method for hardware and software manufacturers to communicate multidimensional control data between MIDI controllers, synthesizers, digital audio workstations, and other products, using the existing framework of MIDI 1.0.

These proposed conventions define a way of distributing polyphonic music over a group of MIDI Channels, making multiple parameters of different notes separately controllable. This will enable richer communication between increasingly expressive MIDI hardware and software.

Briefly, what is defined is as follows:

--- Wherever possible, every sounding note is temporarily assigned its own MIDI Channel between its Note On and Note Off. This allows Control Change and Pitch Bend messages to be addressed to that particular note.

--- A Registered Parameter Number is used to establish the range of Channels used for sending or receiving notes. Two messages control the division of MIDI Channel space into sub-spaces called so that multi-timbral playing is still possible using only one physical MIDI interface.

--- When there are more active notes in a Zone than available Channels, two or more notes will have to share the same Channel. Under such circumstances, all notes will continue to sound, but will no longer be uniquely controllable.

--- Each Zone has a dedicated extra Channel, called the Master Channel, which conveys common information including Program Change messages, pedal data, and overall Pitch Bend. These messages apply across the entire Zone.

The full MPE MIDI specification is available for download in the Specs section of the site.

We recorded the session and it is presented here as a podcast.

Listeners were not only able to send in questions via text but were able to actually join the discussion and interact directly with the panelists. Roger Linn demoed his Linnstrument live from his studio in Los Altos.

DIscussions included the differences between the original MPE spec and the final MMA specification, MPE checklists, and test sequences, and the requirements for obtaining an MMA MPE logo that is under development. 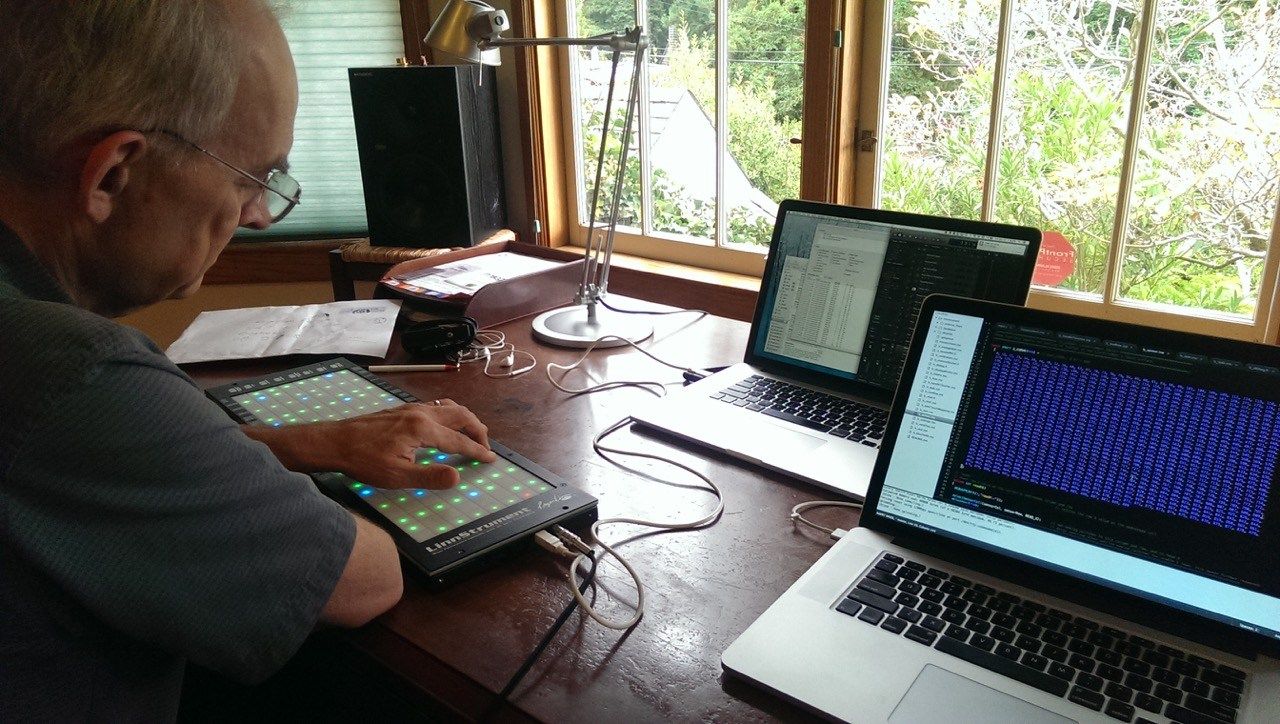 On May 26, we held the very MIDI Live! chat with a panel of MPE specialists. We recorded the session and it is presented here as a podcast.
https://www.midi.org/articles-old/mpe-midi-live-chat-podcast

Here is a collection of Youtube videos showing off how expressive MPE enabled instruments can be.

What is MPE? « ROLI Support

Bitwig | The Future of MIDI

Bitwig Studio is a multi-platform music-creation system for production, performance and DJing, with a focus on flexible editing tools and a super-fast workflow.
https://www.bitwig.com/en/16/the_future_of_midi.html
Tweet
Tags:
#MIDI2.0 note MIDI Polyphonic Expression MPE controllers  to control
Blokas.io, Makers of PiSound and Midihub join the ...
The MIDI Manufacturers Association (MMA) and the A...

Getting started with MIDI 2.0 development – Live workshop series with the Music Hackspace