The MIDI Association at ADC 2022 There are two very important MIDI Association sessions for developers at ADC 2022 described below.

Those sessions are important because since adopting the core MIDI 2.0 specifications in January of 2020, we have been working hard to develop the infrastructure necessary and then prototype those MIDI 2.0 specs.

During that process we discussed and agreed on some significant improvements to the core specifications that are in the final process of review and voting by the MIDI Association and AMEI.

Perhaps most obvious example is that one of the three P's of Profiles Configuration, Property Exchange and Protocol Negotiation will change.

We plan to deprecate Profile Negotiation via MIDI-CI in favor of a simpler method accomplished by a new UMP message.

But there are still three P's because we created a new P called Process Inquiry.

As the MIDI Association, we share with AMEI the awesome responsibility of advancing MIDI while maintaining compatibility with MIDI products made all the back in 1983.  So we are sure that everyone appreciates that we need to take the time to test things completely before releasing MIDI 2.0 products.

We will be sharing an overview of those changes both at ADC and in this core MIDI 2.0 article. 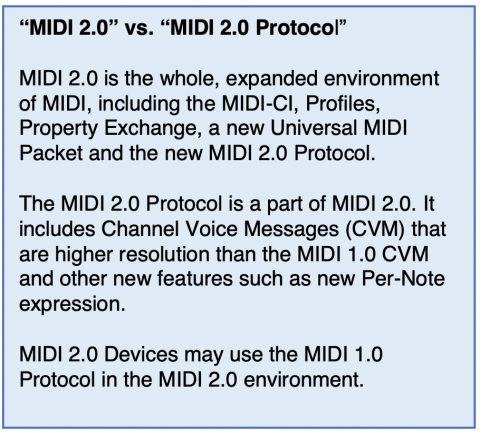 The core MIDI 2.0 Specifications are available for download by MIDI Association Members You must be logged in as a TMA member to download the spec.
https://www.midi.org/midi-articles/details-about-midi-2-0-midi-ci-profiles-and-property-exchange 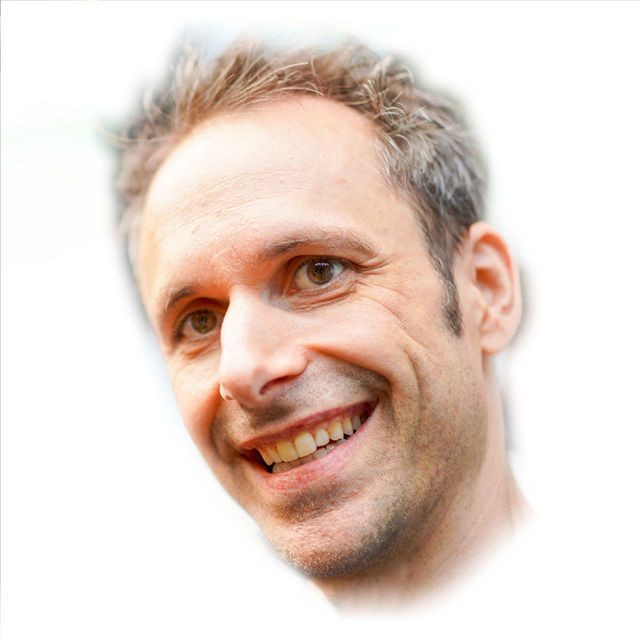 Core members of the MIDI Association present an overview of the available tools for developing, debugging, and deploying MIDI 2.0 products.

A number of tools have been developed to jump-start prototyping and validation of UMP functions and fuel the transition to MIDI 2.0. These tools include software applications for implementing and debugging UMP software and hardware, and testing MIDI-CI implementations. All tools will be shown in action and basic usage will be explained.

Engineers from Apple, Google, and Microsoft will present the current state of MIDI 2.0 implementations in their operating systems. We'll describe the API changes required for MIDI 2.0 for each platform as well as discuss the philosophy and reasoning behind various design decisions. We'll also present the status of transports, such as USB and Ethernet. If you're a developer who is interested in the practical implementations of MIDI 2.0, this is the session for you. 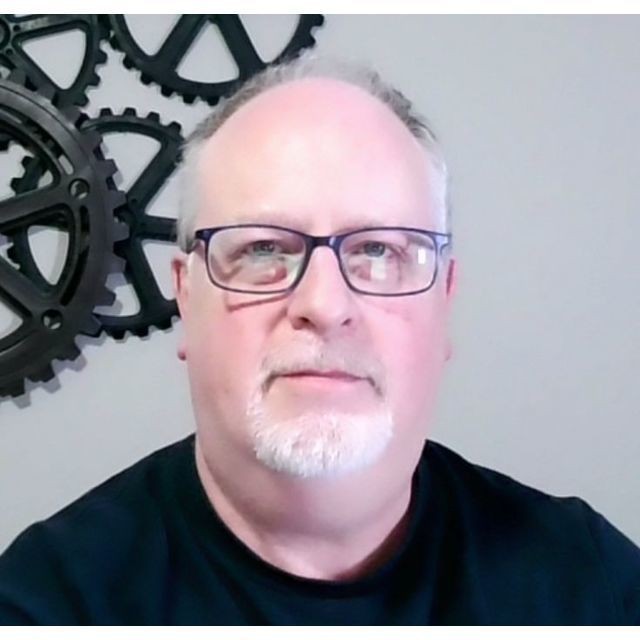 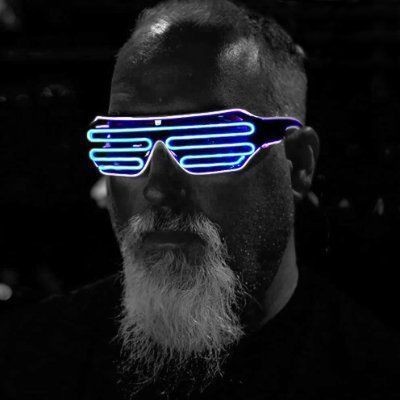 Pete works in the Windows + Devices org in Microsoft, primarily focusing on partners, apps, and technology for musicians. He's the lead for the Windows MIDI Services project which is bringing an updated MIDI stack to Windows, and adding full MIDI 2.0 support.

He's also serves as the current Chair of the Executive Board of the MIDI Association.

When not working, he enjoys synthesizers, electronics, woodworking, astrophotography, 3d Printing, and CNC projects at his home on the east coast of the US. 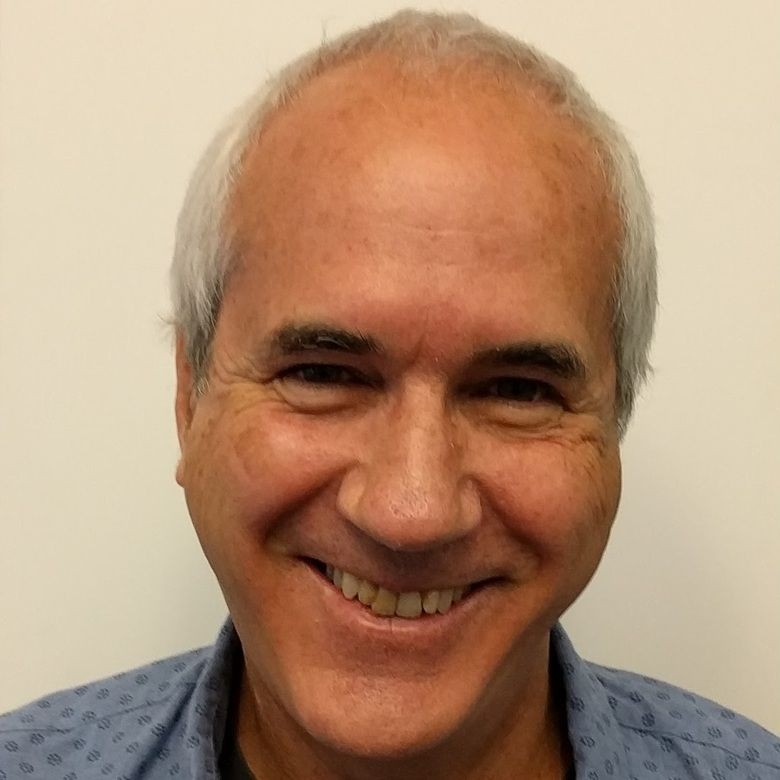 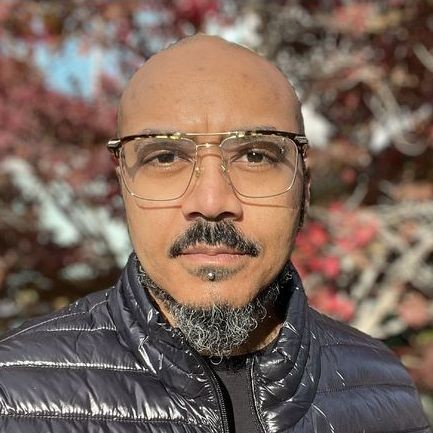 I am a senior software framework engineer on the Core Audio team at Apple and a frequent MIDI specification contributor and prototyper with the MIDI Association. I have been passionate about creating music production technologies that delight audio software developers, musicians, and music producers over my 16-year career with Apple

You should talk to me about:
- MIDI 2.0 software implementations or USB MIDI 2.0 hardware support.
- CoreMIDI APIs, USB MIDI, or BLE MIDI.
- The best food in London.
- Analog high-end audio and vinyl.
- Autechre, Aphex Twin, Squarepusher, and any wonky music with a shedload of bass. 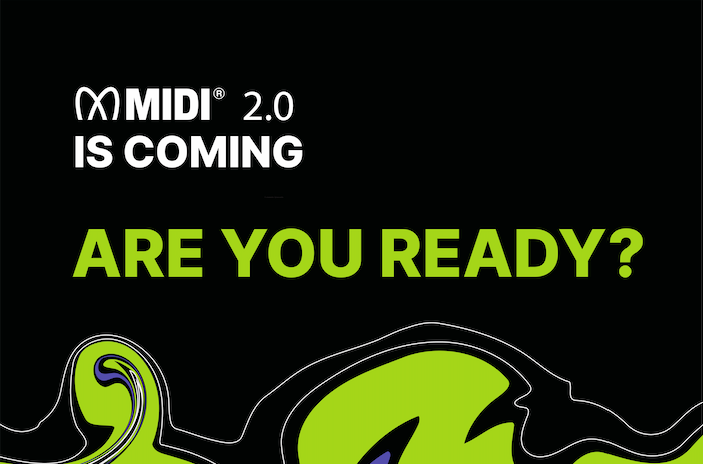 We had worked over 4 years in developing and editing those core specifications.

Then a few weeks after the 2020 NAMM show a global pandemic struck and affected everything.

How did the pandemic affect MIDI 2.0? The pandemic was as disruptive to MIDI 2.0 as it was to everything else.

Although the sales of MIDI products of all types actually increased significantly during the pandemic as people stuck in their homes took refuge and solace in playing music, overall it did slow MIDI 2.0 progress.  Because of supply chain issues many companies were forced to re-design current products and planned products on their roadmaps to use different microprocessors. So instead of working on new things that were redesigning current models.

The MIDI Association has been meeting virtually for several years on the MIDIable collaboration platform developed by Lawrence Levine, (one of our Exec Board members), but the pandemic made it impossible to hold face to face meetings or plugfests.

The MIDI Association faced the problem that all the work we had done on developing the initial specs for MIDI 2.0 was done strictly from a theoretical point of view.

No transports existed that could send the Universal MIDI Packet (UMP), no operating systems that supported UMP and no devices that either supported UMP or MIDI-CI.

Look at the answers Mike Kent and Pete Brown recently posted on a popular blog site. 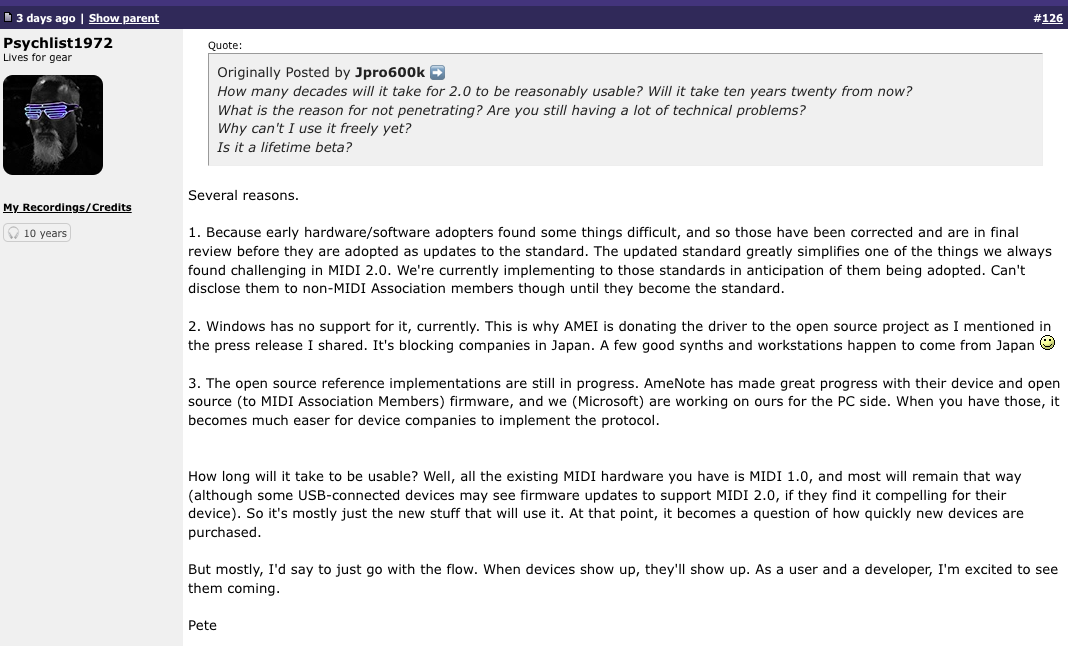 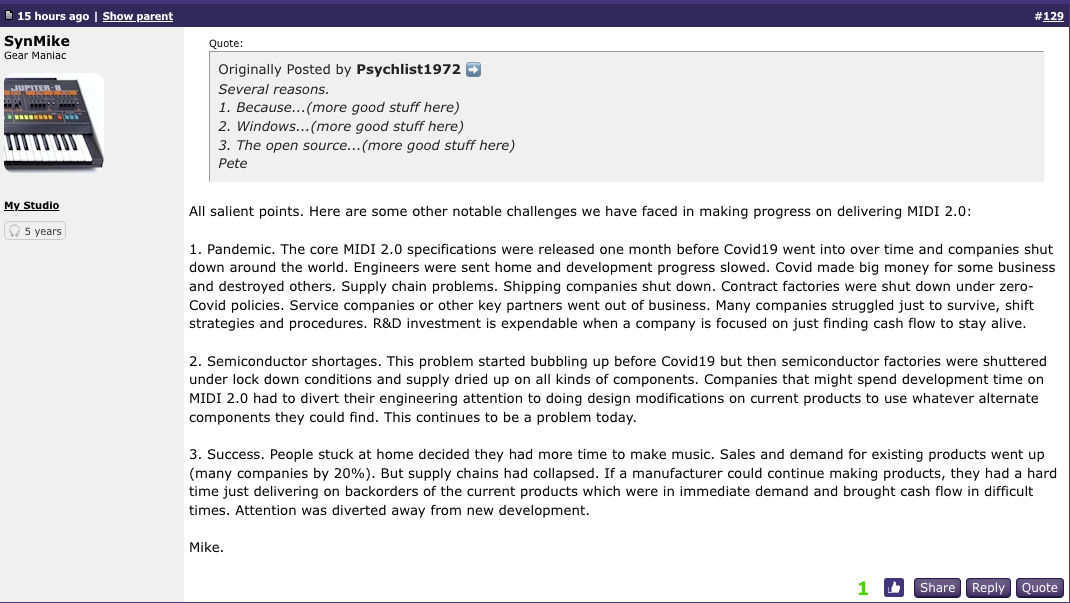 How do you prototype something that doesn't exist?

So how do you prototype something that doesn't exist.

The first step was to create a transport specification that could run the Universal MIDI Packet because even after that transport spec was create and adopted, operating systems would have to develop class compliant drivers and driver development takes time.

USB Implementers Forum, Inc. (USB-IF) is a non-profit corporation founded by the group of companies that developed the Universal Serial Bus specification. USB  has its own set of rules, IP policies and bylaws. Fortunately there were a group of MIDI Association companies who were also USB-IF members.  So a number of companies including Apple, Focusrite. Native Instruments, Roland and Yamaha worked in the USB-IF to development the USB Class Definition for MIDI Devices v2.0.

In June of 2020, the USB Class Definition for MIDI Devices v2.0 was adopted by the USB-IF which meant operating systems could start developing Class Compliant drivers and APIs.

As computers have become central components in many MIDI systems, USB has become the most widely used protocol for transporting MIDI data. With the introduction of MIDI 2.0, the USB Implementers Forum's USB MIDI 2.0 working group, headed by members o
https://www.midi.org/midi-articles/midi-2-0-progress-continues-with-updated-usb-specification 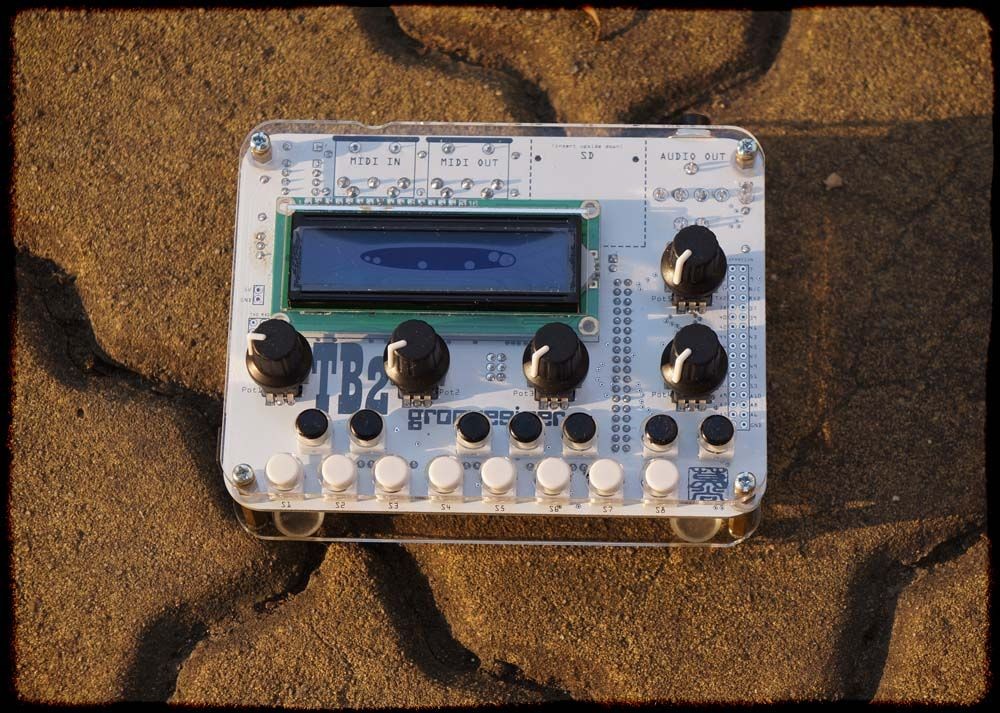 Groovesizers are kit-built DIY sequencers and synths. They're open-source instruments, which means firmware for the Groovesizers can be freely examined, shared and changed in the beginner friendly Arduino IDE.

With the Quartet firmware, the TB2 is a 4 voice paraphonic wavetable synth shield for the Arduino Due development board. The TB2 features 2 oscillators per voice, an ADSR envelope, LFO, digital filter, arpeggiator, as well as a 16-step sequencer.

For sound generation, the TB2 makes use of the pair of 12-bit DACs built into the Arduino Due's 32 bit ARM processor. The TB2 uses an SD card for storing patches and sequences, and it also allows the user to load single cycle waveshapes for the two oscillators and the LFO.

The MIDI Association reached out to Jean Marais, a South African living in Taiwan. Jean graciously agreed to make some TB2's specifically for the MIDI Association and we sent TB2s outo some of our members so they could start prototyping MIDI 2.0.

The Groovesizer only has a 5 PIn DIN MIDI In and a 5 PIn DIN Out.  So how can it be a MIDI 2.0 device?  MIDI 2.0 is defined in the specifications as something that can establish bi-directional MIDI connectivity that allows two devices to connect to each other and query their capabilities (MIDI Capability Inquiry) and auto configure themselves.

So MIDI-CI Profile Configuration and MIDI-CI Property Exchange can be done on any MIDI 1.0 transports because the device discovery is done using MIDI 1.0 Universal SysEx Messages.

Apple, Google and Microsoft are all MIDI Association members.

In fact, Torrey Holbrook Walker from Apple and Phil Burk from Google are both former MIDI Association Executive Board Members and Pete Brown from Microsoft is the current Chair of the Executive Board.

We recently put out a press release for AMEI (Association of Music Electronics Industries), our partner in Japan in developing MIDI specifications that made an announcement about AMEI's plans to support an Open Source driver for Microsoft and reviewed the current situation with Apple, Google and Linux.

by The MIDI Association (on behalf of AMEI)

November 1, 2022 - The Association of Musical Electronics Industries (AMEI), the organization that oversees the MIDI specification in Japan, has committed to funding the development of an open-source USB MIDI 2.0 Host Driver for Windows Operating Sys
https://www.midi.org/midi-articles/amei-to-fund-open-sourcemidi-2-0-driver-for-windows 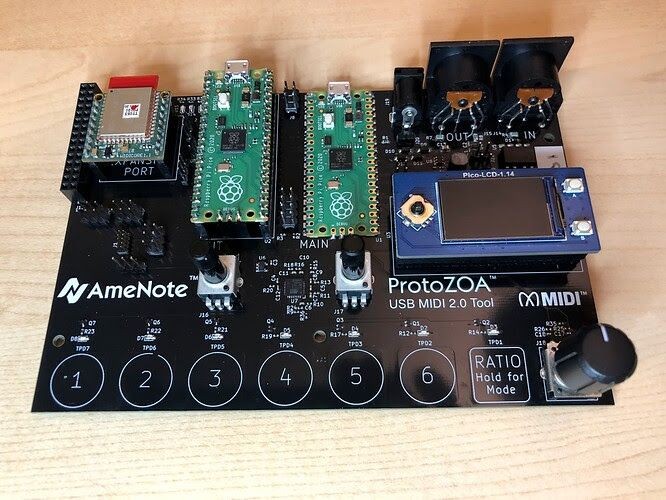 These tools work together for prototyping and testing foundational MIDI 2.0 features such as the new Universal MIDI Packet, MIDI-CI Discovery, Profile Configuration, Property Exchange, USB MIDI 2.0, and MIDI 1.0 to 2.0 Translation.

With these advances, companies around the world now have the software and hardware tools needed to build, test, and ensure the compatibility of their MIDI 2.0 products.

Amenote developed the ProtoZOA using Raspberry PICO CPUs because they are openly accessible and extremely affordable. 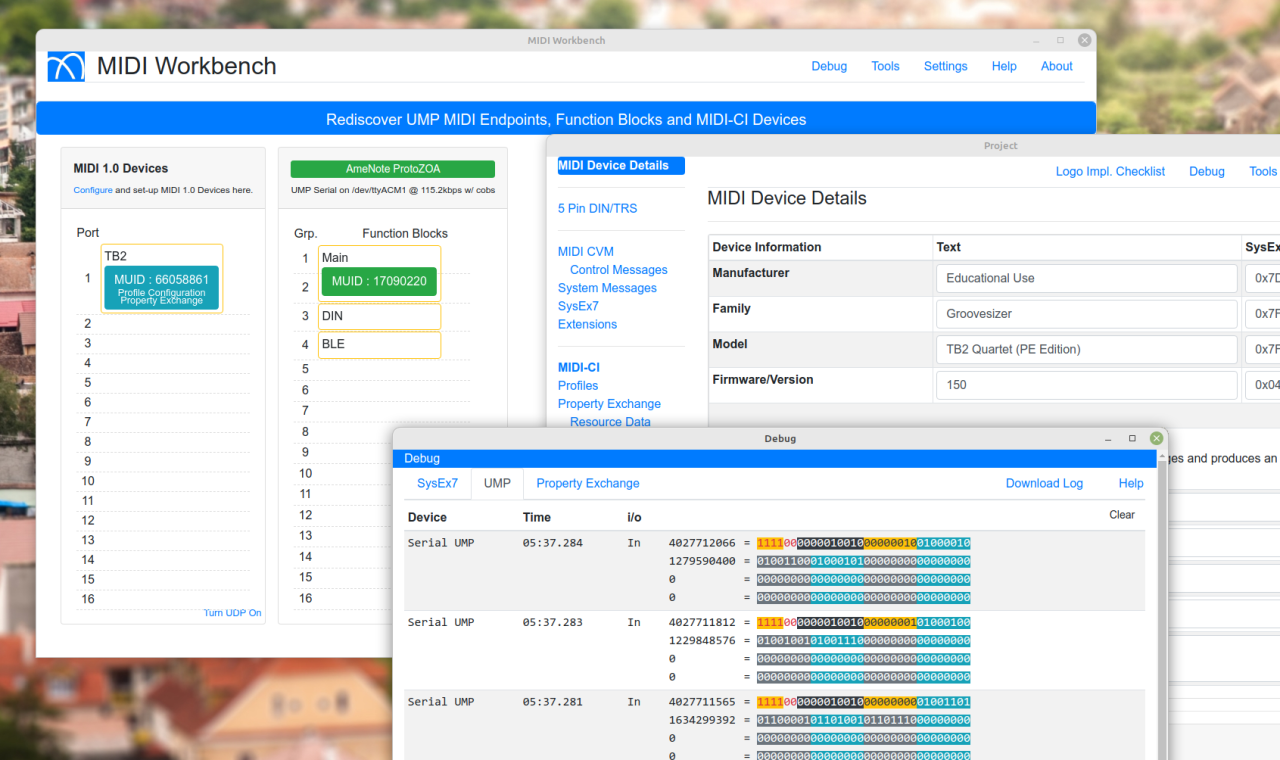 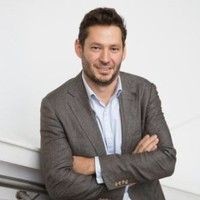 If you are attending ADC in person, there are lots of MIDI Association members who will be at ADC. Also on top the presenters listed below,  we arranged to have Jean Baptiste (JB) Thibeaut (MIDI Association Exec Board member and co-founder of the MIDI Innovation Awards) attend.  JB is CEO of Music Hackspace now, but when he worked for ROLI he actually ran Audio Developers conference for many years.   Just look for the MIDI Association poster in the poster area and JB is happy to give you details about why now is a great time to join the MIDI Association.

As you can see, we are working hard every week to bring the promise of MIDI 2.0 to the world. 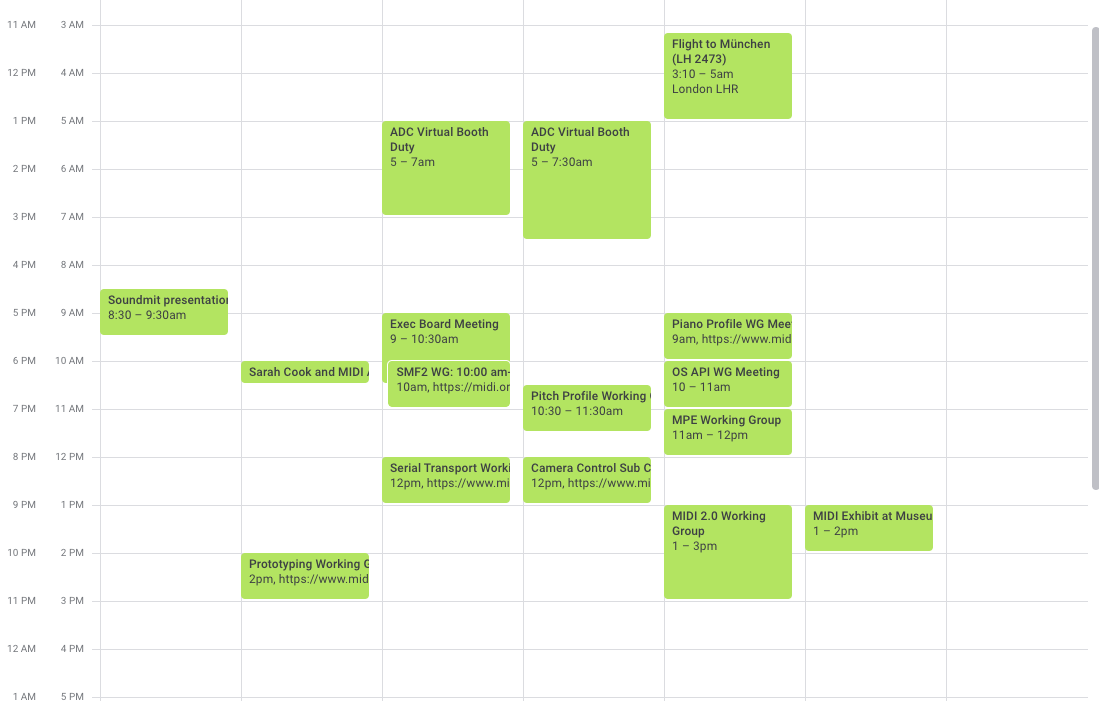 Times on the far left are London time and next to them is Pacific.
Tweet
pinterest
×
Stay Informed